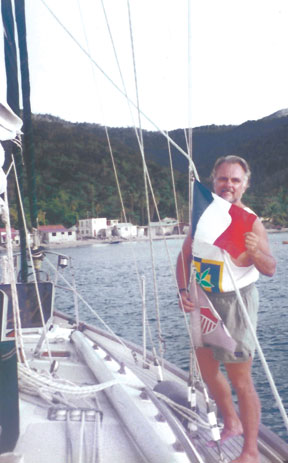 We loved Antigua for its history, living museums, friendly people, snug anchorage, facilities and so much more. However, after an 11 day stay, we reluctantly had to move on. Our next port of call was Deshaies on the French island of Guadeloupe.

Deshaies pronounced “Day Hay” is on the northwest corner of Guadeloupe. From the anchorage, Deshaies looks very much like a village on the French coast with its colorful shops and brightly painted fishing skiffs bobbing on their moorings. The harbor is opened to the West as all of the Leeward Island anchorages are. Seldom do they get a west wind blowing into the harbor. However, when we first arrived, we had west winds and the anchorage had quite an uncomfortable roll. We launched our dinghy, which is always deflated when we travel in open waters, and set out to go to check into customs.

At first there was no customs official. However there were customs forms which you fill in yourself and leave for the official. It seemed to be a do it yourself check-in. While we were in the process of filing out the forms, an official did arrive and simply cleared us in. This was a far cry from our last port of call, Dominican Republic where the “commadante” came in with a side arm strapped to his waist. He also wanted gifts from us.

Deshaies was a small seaside village with restaurants, a few gift shops, a bakery, a church, and the usual small town buildings. We didn’t see too much because we were tired and went right back to the boat to get an early the next day to Pointe Pitre which is the capitol city of Guadeloupe.

Guadeloupe is uniquely shaped like a butterfly. The island is separated 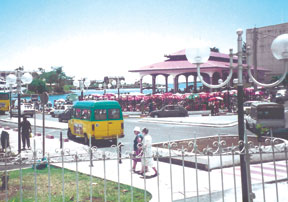 by the Rivierie Sallee which divides the wings of this butterfly shaped island. While we were there, most sailing boats bypassed Pointe Pitre because it was inconvenient to get to, but we wanted to see this most interesting city. The northern route takes us through the reefs and into the river which flows through mangroves to a draw bridge which opens only once a day at 5:00 am. The River Salee is shallow and we had to be very mindful of the depths. We did go aground once, but it was soft mud and we quickly powered off. Once we arrived at the bridge, we had to anchor and wait until the next day when the bridge opened again. Now you can see why most cruisers either do not go to Pointe Pitre or else they go the longer way down the western coast and the all the way back up.

Pointe Pitre, as all of Guadeloupe, is very French. Only a little English was spoken here. It is a most interesting city with French Colonial architecture. Many of the older buildings have wrought iron balconies overlooking the town. The main market square was an explosion of colors and pleasant smells. Men with baskets of freshly caught fish were hawking their catch. The market ladies sat under brightly colored umbrellas of tents selling their fruits and vegetables as well as an assortment of spices. If we couldn’t pronounce it or identify it, we did not buy it. The produce included carrots, potatoes, and cucumbers, along with these family staples were cristophine, dasheen and cassava.

Cassava for example, is a most interesting tuber. It is a staple of the West Indian diet. I didn’t even want to try it because it contains prussic acid 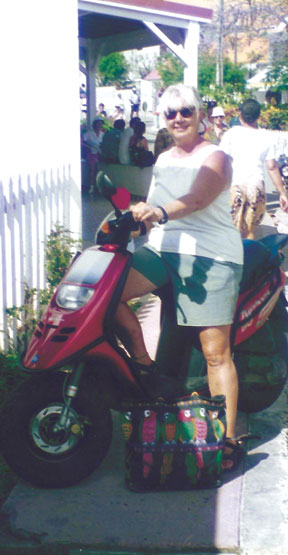 Me, on my scooter in Iles de Saintes.

which must be removed by cooking or pressing, otherwise it can cause death by poisoning. As a matter of fact, the Arawak Indians were known to commit suicide by biting into an uncooked cassava rather than face torture or capture from their Spanish invaders. With all its faults, cassava is a common root vegetable even used in making bread. All I can say about that is, “It may be safe, but not on Grendel!”

After a very pleasant four day stay, we set sail to windward to Iles de Saints. The Saints is a small group of islands that belong to Guadeloupe. The “Saints” is a resort for the French people from the mainland. It is very French and most charming. Most of the original settlers came from the north of France, especially Brittany. The streets were lined with quaint shops, restaurants, outdoor cafes and many scooter rental locations. The beaches are beautiful and are adorned by topless beauties which Herm enjoyed! We rented a scooter for two and road all around the island of Terre Haute. Since we left St Martin, February 17, we had seen very few American boats. As a matter of fact, we were the only boat flying an American flag in all of Guadeloupe.

Finally, we met up another boat named “ACADIA” from Canada. We met these sailors in the Bahamas as well as Virgin Gorda in the BVI’s. It was nice to see a familiar face again. Yes, I know they were from Canada and not United States, but it did not matter. They were the closest we came to folks from back home for quite awhile.

Frances is a Commodore of the Seven Seas Cruising Association and a member of Sailing Association of Marco Island and AP United States Power Squadron.