Great Migration of the World 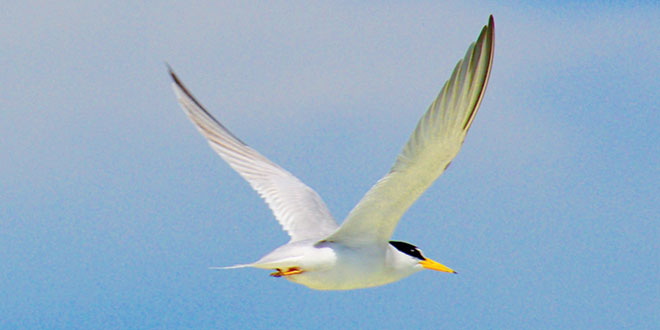 A least tern flies over its nest on Tigertail Beach. Its cousin, the Arctic tern, will migrate up to 44,000 miles each year! Photo by Bob McConville

Planet Earth is on the move! Every day, somewhere around the globe, some type of animal is on a migration route. Whether the need be food, water, warmth or finding a mate, there is a constant pattern of motion on our planet. Let’s talk about the migration of the largest number of land animals.

This event takes place on the continent of Africa. In the springtime nearly two million wildebeest, zebra, gazelle and impala follow an annual pattern in their search for fresh grazing lands. The trail taken by these animals is now very predictable, but the timing of the journey may vary from one year to another based on rainfall.

In November or December the animals will arrive on the short grass plains when the rainy season begins. Wildebeest and zebra can be seen everywhere feeding on the fresh sprouts of grass.

This is also birthing season and by mid February or March both the adults and the calves are ready for the start of their great migration.

Seeking fresh grazing lands and water, a northern route is established. Sometimes hectic, these moving columns now number in the hundreds of thousands. The Grumeti River and the Mara River can sometimes pose a problem along the way. The animals seem to gather on the western banks of these rivers prior to crossing and then launch a mass swim to the opposite bank. They possess a “Swarm Intelligence” that allows the herd to overcome such obstacles by acting as one large body.

In July and August the herd spreads out on the northernmost leg of their trip, seeking new grass produced by more rainfall. In September and October the migration continues along the Serengeti National Park, eventually leading them back to the fresh shoots on the short grass plains where the process begins again.

Although it is not the longest migration on the planet, millions of these animals travel 1,800 miles annually in order to assure the survival of these species.

There are many more fascinating stories such as this one that takes place on Earth. Even here in the Marco Island area we have least terns and swallow tail kites that have come from South America. Some species of terns travel 44,000 miles in a year!

Join me on June 7th to learn more about these journeys!

Bob is the owner of Stepping Stone Ecotours and also a naturalist on board the Dolphin Explorer.

He is a member of the Florida Society of Ethical Ecotourism. Bob loves his wife very much!