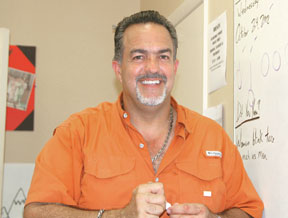 Vince Lombardi: “A man can be as great as he wants to be. If you believe in yourself and have the courage, the determination, the dedication, the competitive drive and if you are willing to sacrifice the little things in life and pay the price for the things that are worthwhile, it can be done.”

Coaches have a profound impact on our lives. They make us strive to be better. They have the opportunity to teach lessons that are carried on throughout life. Lessons our children learn which have less to do with individual winners, and more to do with team building. You can find community spirit is alive and well on the fields, courts and tracks where parents, family and friends rally around their favorite teams and their coaches.

Coastal Breeze News will focus on area coaches of a variety of sports. First up are the coaches of the new football team at the Marco Island Academy, 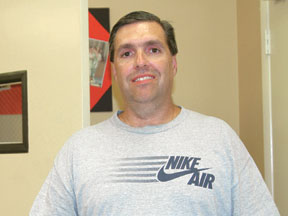 Andy is owner of Andrew Hunter Homes. Prior to starting his own business, Andy was a police officer on Marco Island. Like the other coaches, local children know Andy through other teams he’s coached and through his children. He has coached youth organizations for 20 years and brought the Cal Ripken baseball league to Marco Island. Last year, he formed the first baseball team for the Marco Island Academy. When asked about coaching the boys at MIA, Andy comments, “These kids are in it 100%. Their parents are in it 100%. The players respond so well. The school, faculty and the staff are all supportive. It is an honor coaching these kids and helping them develop into good young men. Since day one, these kids are three to four years ahead of expectations. The support everyone gives this team inspires me to coach with all my heart.” 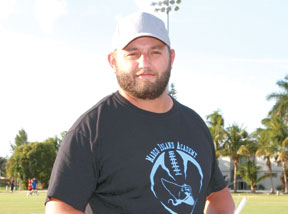 for Kellogg’s. Steve has coached for sixteen years, from third grade to high school. He believes in showing the players how to do things the right way. “I enjoy teaching the proper techniques in football. One of the most noteworthy players to have played for me was a very talented hard worker named Brian Hartline, Wide Receiver for the Miami Dolphins. I didn’t do a whole lot of coaching with him but I got to stand on the sideline watching his talent unfold on the football field. I think players should enjoy the game as long as they can and parents need to be supportive whether the team wins or loses. We can’t always win everything, but we can give 100%. We can learn something each day and that keeps me motivated. I’ve coached a lot of kids and enjoyed every minute of it.” 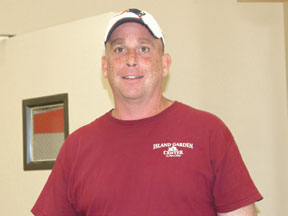 and college. He saw the team during a summer clinic and wanted to help. He believes in leading by example on and off the field. Adam commented, “As a coach, the kids deserve your best, it’s not fair to ask them to give 100% and for you not to model the same.” To parents, Adam says, “Motivate your kids, trust your young men and women. Do not let them “slide by” on the field or off the field. And it’s okay if they learn to lose, get hurt and fail, let them fail forward.” For the players Adams message is simple, “you’re as good as you make yourself.”

Chris Burt is owner of Island Garden Center. He coached the Cal Ripken league along with Andy and Steve. Chris is a familiar face on local football fields having coached the Eagles at Marco Island Charter Middle School. Andy recruited Chris to help with the new Rays team and he 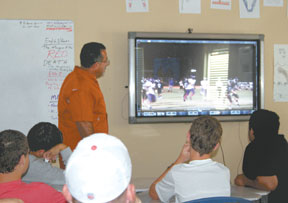 jumped in to help. Chris commented, “We have a great group of kids. You can just see it start to click for them. Their improvement is amazing! That improvement is addicting. This is what makes coaching so rewarding. These kids are so much tougher than we think they are. We knew it wasn’t necessarily going to be easy starting out this season, but these kids are working it and are way beyond expectations. With summer clinics and a bit of effort over the year, next season will be a great one.”

Just two days before their next game, the players reviewed the last game with coaches. Coaches reminded players this was not touch football, it is a violent game.

Players took credit when due and listened attentively to instruction for improvement when given. They laughed at themselves, and at times, the players criticized themselves. They committed themselves to trying harder, playing better and being more aware. Final words from the coaches included nutritional advice for optimum conditioning and “hydrate, hydrate, hydrate!”