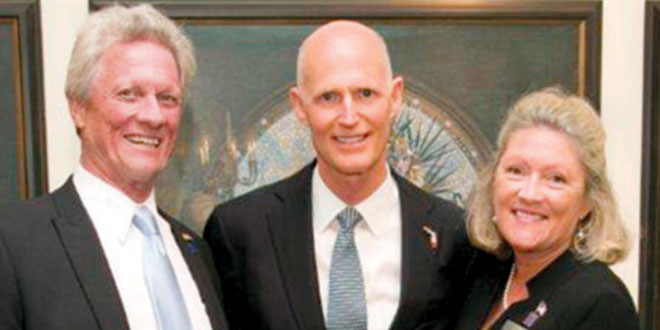 As in years past, the Marco Island contingent made up of Bette McGilvray (MIAAOR President, 2014 and Florida Realtor’s Key Political Contact for Rep. Kathleen Passidomo), Dick Shanahan (MIAAOR Legislative Committee Chair 2014), and Steve Josselyn (Legislative Committee member), teamed with NABOR (Naples Area Board of Realtors) to meet with legislators in Tallahassee last week to discuss issues relevant to all of us Florida Realtors.

The four main issues MIAAOR and NABOR presented to our legislators were as follows:

• Support for SB 176 and HB 11, which look to lower the commercial lease sales tax from six percent to five percent in 2014. Since Florida is the only state in the union that currently has a sales tax of this kind, we believe it puts our state at a competitive disadvantage when trying to attract new business. The legislators we spoke to all seem to be in favor of these bills, but the amount of money at stake will be the ultimate determining factor.

• There is $291 million in Sadowski Funds available in fiscal years 2014-15 that we support being used for affordable housing. In 1992, realtors strongly supported an increase in the documentary stamp tax on deeds for all real estate transactions by 10 cents per $100 of value if all of the monies collected went to housing programs. That hasn’t been the case since 2002. We believe that using this $291 million for housing programs would create more than 27,000 jobs and add $3.4 billion to the Florida economy.

• Florida realtors also supports efforts to create a competitive and sustainable property insurance market. These well publicized efforts have successfully urged congress to pass legislation that was signed into law last week by President Obama, that provides some reform that will bring stability, certainty, and smaller rate increases to the National Flood Insurance Policy brought on by the passage of the Biggert-Waters Flood Insurance Reform Act of 2012. The other two bills we support include HB 143 and SB 346 which lengthen the amount of time property insurance companies have to pay assessments to the Florida Insurance Guaranty Association (FIGA). These bills would allow FIGA to collect assessments in monthly installments if it has enough funds to pay claims for six months or more. This is important when trying to attract more insurance companies to Florida and create a more competitive independent insurance market in our state.

• Finally, the issue of water quality was presented to all the legislators we met. We support the completion of the Department of Health’s Onsite Sewage Nitrogen Reduction Strategies to understand how onsite wastewater systems work in different areas of the state. We urged them to support the $650,000 in funding to complete this study. Additionally, we urged them to support funding alternative storage options that would alleviate some, if not all, of the disastrous outflows that plagued our region last year.

Our meetings with Legislators were well received. We met with Senator Garrett Richter, Senator Dwight Bullard, Representative Matt Hudson, and Representative Kathleen Passidomo to present these important issues. We also sat in on meetings with Senator Lisbeth Benequisto. We were able to sit in the Senate Gallery during session while they passed numerous bills on Tuesday. On Wednesday late day we sat in the House of Representatives Gallery during presentation, amendment, and debate about a number of different bills before the house. It was interesting to watch our government at work and drove home the importance of our travels to Tallahassee each year to present important issues affecting our real estate industry in Southwest Florida.