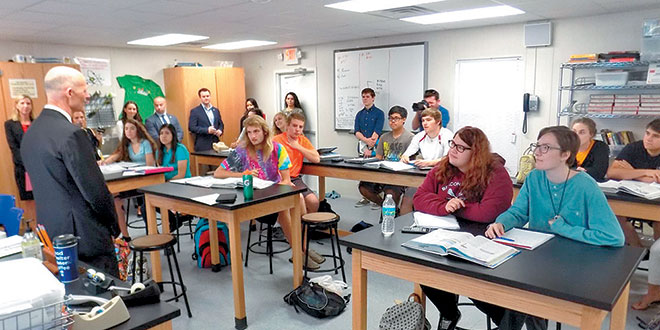 Governor Scott congratulates an MIA class on attending such an outstanding school andurged them to participate in the political process. PHOTOS BY BARRY GWINN

It was the most excitement in my 10 years on Marco Island – maybe ever. The governor of the third most populous state in the nation (only California and Texas are larger) had come down from the mountain to visit one of the smallest high schools in that state (235 students).

As promised, the Governor arrived at Marco Island Academy promptly at 10 AM, commenting as he arrived that he always tries to be on time. After personally greeting the school’s friends and supporters, the Governor toured every one of the classrooms, spending time there with the teachers and students. In each classroom, he expressed admiration for what MIA was accomplishing, inquired as to the students’ plans for the future, and tried to get the students interested in political participation. At 11 AM, right on schedule, the governor bade farewell and departed in his three-vehicle motorcade. It was quite a morning. In the following days, reports of the visit appeared on the local evening newscasts and local

Governor Scott arrives promptly, to his left, Jane Watt, and (rear left) Olivia Watt and Teagan Havemeier, who played a big role getting the Governor to visit.

newspapers. This is exactly the kind of publicity for charter schools that MIA founder and Board Chairman Jane Watt has been striving and hoping for.

Watt, a happily married soccer mom with three children, began her campaign to establish a high school on our island in 2008. The efforts to obtain community and school board support are chronicled in her eminently readable book, “Fighting for Kids.” This book became my bible during the spring and summer of 2015.

During her efforts to establish a high school on Marco Island, Watt has focused on one large issue at a time. Her first goal was to obtain school board approval for a public charter high school on Marco Island. There seemed no chance of this at first, but in November 2010, after a concerted and grueling campaign, the Collier County School Board relented and gave their approval. Now for Watt’s second goal – obtaining an actual campus site for the new high school. This quest was punctuated with frustrations and disappointments, but

The news media jockey for position as Governor Scott arrives.

finally, in September 2015, MIA was able to buy a 6.6-acre parcel, on San Marco Road. The school had been leasing this parcel, but a loan from a donor friend of the school (about $2M) enabled the school to buy it outright. The mortgage payments are less than the previous lease payments, but are still considerable. The loan must be paid off in two years. Fundraising takes up a large chunk of Watt’s waking hours. Following the purchase of the campus site, Watt was finally able to concentrate on her third goal – levelling the playing field with public schools and obtaining increased state funding for charter schools. (She is hoping for ripple effects throughout the U.S.)

Watt is now well positioned to do this. She is currently a decorated member of the governing board of the Florida Consortium of Public Charter Schools, recognized as the state’s leading charter school advocacy and support group. She is frequently asked to speak at Consortium events. Watt was recently named Marco Island’s

MIA Principal Melissa Scott (no relation) beams as Governor Scott proceeds through reception. Melissa is a recipient of the Governor’s Shine Award for her commitment to improve the education system, and efforts to ensure a high quality education for students.

Citizen of the Year. Now, she has the ear of our governor and state representative and has garnered countywide media attention. Watt intends to take advantage of her bully pulpit on behalf of Florida’s charter schools.

“Unlike traditional public schools, charter schools do not have [equal] access to capital millage funding,” Watt told me, “During the past eight years this funding has plummeted for Florida’s charter schools. For MIA it has been cut nearly in half.” The funding does not nearly cover the cost of maintaining and adding necessary facilities. (An additional fundraising campaign for the addition of a gym/auditorium is about to begin.) Nor does it cover the substantial mortgage payments for the campus. Watt is required to do extensive and constant 24/7 fund raising to make up the shortfall. Her meetings with potential donors and appearances at community events take up a lot of her time. “There had to be a better way to secure necessary funds,” said Watt, “In the fall of 2015, I determined to 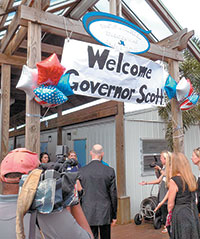 A large welcome sign greets the governor as he begins his tour of the classrooms.

reach out to our local state legislators.”

In December, Watt traveled over to Naples to meet with Kathleen Passidomo, Collier County’s legislative representative in Tallahassee. Passidomo is known for keeping a close eye on the county and was already familiar with MIA’s arrival as a consistently performing “A” school. “I wanted to make sure that our legislators were aware that our charter schools were being under funded,” Watt told me, “I also wanted them to know how successful our school had become.” After a half hour or so with Watt, Passidomo was on board. “Representative Passidomo was impressed with the grass roots support of the community and with MIA’s status as an elite ‘A’ school,” Watt said, “She felt that Governor Scott might want to know more about this.” Passidomo was right. The governor did want to meet with Watt. Passidomo set it up.

On February 2, Watt made the seven-hour, 451-mile drive to Tallahassee. She took along two of MIA’s outstanding students, Teagan Havemeier, a freshman, and Olivia Watt, 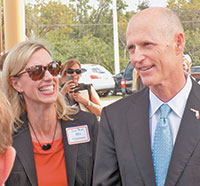 a sophomore. They met with Governor Scott the next day. “We were scheduled for only five minutes with the Governor,” Jane said, “After meeting Teagan and Olivia, he wanted to hear more about the school and

stretched it to 20 minutes.” I know from personal experience that Jane Watt can pack an awful lot into twenty minutes. Her passion and acumen are all but irresistible. Watt proceeded to relate how the community had backed the school and how successful it had become. She used as examples, Teagan and Olivia, and also Fermin Mendoza, the valedictorian of MIA’s class of 2015. Mendoza is the son of immigrants and was fortunate to have been born here after his parents arrived in the U.S. While helping his father in his landscaping business, Mendoza spent hours each week volunteering in community service (MIA requires a minimum of 100 volunteer hours per student), setting a school record in cross country, founding a math club, writing for the school paper, and never receiving less than 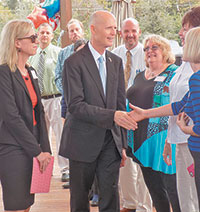 Jane accompanies Governor Scott as he meets each of MIA’s teachers.

an “A” in his subjects, most of which were in AICE (college level) classes. He graduated with a weighted 5.2 GPA and with what amounted to a full scholarship to Johns Hopkins University. Johns Hopkins has one of the world’s most prestigious medical schools and has recently been rated one of the nation’s top twelve universities by U.S. News and World Report. Mendoza’s mother was drawn to MIA because of its STEM (Science, Technology, Engineering, Mathematics) based curriculum and because of the small size of its classes. I know Teagan Havemeier, Olivia Watt and Fermin Mendoza. Any school would be fortunate to get them.

Near the end of the meeting, Teagan and Olivia stepped forward and presented a handmade invitation to Governor Scott. It invited him to visit MIA and was signed by the entire student body. I can only imagine his reaction. What followed is now widely known. It should go down as one of the most unlikely and improbable stories ever reported. But then, so is the story of Marco Island Academy, the little school that could.