Governor Having Love Affair with Goodland? It sure looks that way after second visit in two months 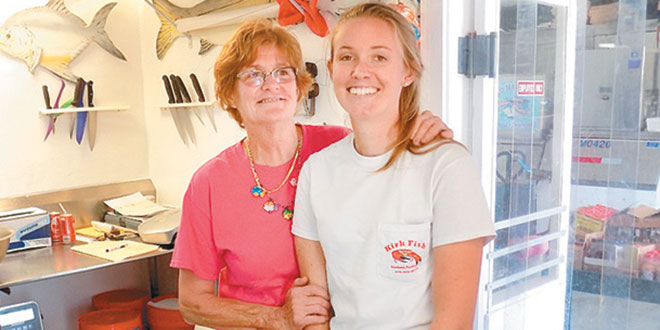 On March 4, 2016, Governor Rick Scott paid a visit to Marco Island Academy (MIA). He was there at the invitation of founder and board chairman, Jane Watt, to confer awards on four of the school’s outstanding educators and to see for himself why this school was doing so well. It was about noon when he concluded his visit to MIA. Before leaving, he asked directions and distance to Goodland. The Governor had made the acquaintance of Patti Kirk eight years before, when both worked out at the same Naples fitness center. He had enjoyed meals at Kirk’s restaurant in Naples and recalled that they had recently moved their fish market, the Kirk Fish Company, to Goodland. Upon finding that Goodland was just down the road, the Governor took his entourage down there for lunch. Patti and Kelly Kirk served them right from the refrigerated display case. The visit was reported in the March 18 edition of Coastal Breeze News.

On May 7, a Saturday, the Governor again came to call – this time by sea. Around mid-day, the Governor and his wife, Anne, pulled up to the Kirk dock in their Boston Whaler. Accompanied by a member of his security detail and followed by an FWC (Fish and Wildlife Conservation Commission) boat, the Governor stepped ashore…and ordered takeout. Patti Kirk, the Governor’s old friend, was away, but Kelly Kirk, Patti’s daughter, took care of

the Governor and his entourage. “It was the Saturday before Mothers’ Day,” recalls Kelly, “It was busy and hectic when the Governor arrived.” Governor Scott didn’t eat this time but ordered take-out – stone crabs and mustard sauce plus key lime pie for him and his wife plus two members of the entourage. The Governor had to wait around in the crowded store, while the crabs were being cracked. “He was kibitzing with the customers and recommending that they take home some of the key lime pie, which he claimed was the best.” (He also raved about the stone crabs.) The Kirks buy the key lime pie from Rode’s bakery on Bonita Beach Road. They deliver to Kirk’s Fish Market exclusively on Marco Island, Kelly says. The stone crabs come mostly from the Goodland fleet docked behind the store. “One of the greatest combinations for a meal is fresh fish, stone crabs and key lime pie,” said Kelly, “Add a side salad and some champagne, and it is perfect.”

After the Governor’s first visit in March, Patti and Kelly resolved to take some pictures, should he come again. “It was so busy during the half hour he was there, I just didn’t get a chance to take any pictures,” said Kelly. I dare say she will get another chance. Goodland is kind of like a bag of potato chips. It is awfully difficult to restrict yourself to one or two.