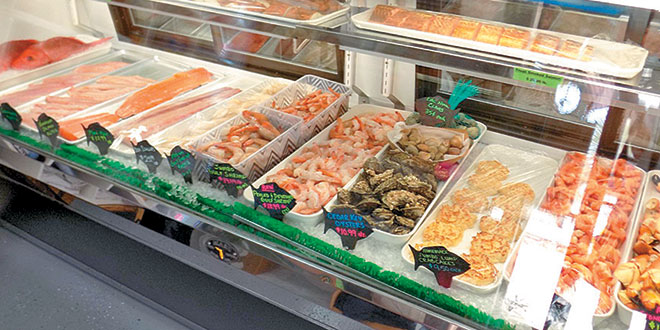 The governor’s lunch came from this display case.

At about 12 noon on Friday, March 4th, one of the most well-known and easily recognizable men in Florida came to Goodland, ate lunch, and left. And almost no one in Goodland knew anything about it – except for Patty and Kelly Kirk. They knew all about it.

Governor Rick Scott paid a visit to Marco Island Academy Friday morning. Done before noon, Scott’s thoughts turned to lunch and to Patty Kirk, an old friend. Patty and Damas Kirk, along with their daughter, Kelly, own and run the Kirk Fish Company in Goodland. They sell fish. At around noon, Patty was out back of the store grading crabs, when Kelly came out and told her she had a visitor. Patty went back in and found Governor Scott and his entourage, standing in the processing area. “He never told me he was coming,” said Patty, “It was totally unexpected.” I asked her if she was overwhelmed upon seeing the governor in her store. “Not really,” she said, “I just gave him a hug and 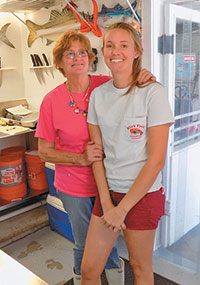 said ‘Rick, it’s good to see you.’” The governor told her that while he was visiting MIA, he recalled that Patty had set up shop in Goodland. He asked how far it was to Goodland from the high school. Upon learning it was only a mile and a half away, he resolved to eat lunch in Patty’s Goodland restaurant. He found Patty, but not her restaurant.

Patty Kirk first met Governor Scott in 2008, before he was governor. “We both worked out at the same fitness center in Naples,” Patty recalled, “For some reason, one of the trainers introduced me to him.” Scott said he already knew me from eating at my restaurant. Kirk had a restaurant, Captain Kirk’s, in Naples for 17 years, before selling it in 2013 and moving the fish market part of the business back to Goodland. Thereafter, they would converse at the fitness center and at Captain Kirk’s, when the governor came to eat. “There was not much more to it than that,” Patty said, “We just got along and

seemed to enjoy each other’s company. We only talked occasionally, and only at the fitness center and the restaurant. After he became governor, and maybe before, we talked about the importance of sustaining our Florida fisheries. My family and many of our friends were totally dependent upon this industry. We were concerned that it needed attention in order to survive.” Patty said that the governor agreed with this whole-heartedly, was supportive, and recognized that this was an important part of the state’s economy.

So here was Governor Scott, four aides, and three security men, asking for lunch at a fish market. “I told him that there were four lovely restaurants nearby and that we weren’t set up for lunch,” Patty said, “He had been eyeing our seafood offerings and was insistent on staying for lunch. We had some old picnic tables on the dock in back of the store. I led all eight of them out there and got them seated. They dined on the stone crabs, smoked fish dip, smoked salmon, and peel and 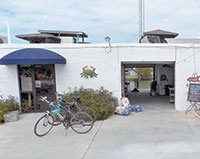 eat shrimp from our display cases.” To wash all this down, sodas and water were provided from a vending machine.

Patty became busy in front of the store and asked Kelly to take care of the governor and his party. Governor Scott had previously suggested officials for Kelly to contact for fisheries issues. “I never miss an opportunity to highlight the plight of our fisheries industry,” said Kelly, “You could say that the subject came up during lunch.” Scott told Kelly, “Now that I know where you are, I will bring my family and three grandchildren over by boat for another visit.” Except for a few gawking outdoor diners at the Little Bar Restaurant next door, the governor enjoyed his lunch in privacy. Kelly told me that as the governor walked out of the store, he paused in the crowded storefront. Nodding at Patty and Kelly, he said, “Folks, this is a wonderful family.” And then he was gone. “I think he is a wonderful governor and asset for our state,” said Kelly. The affection runs both ways here.