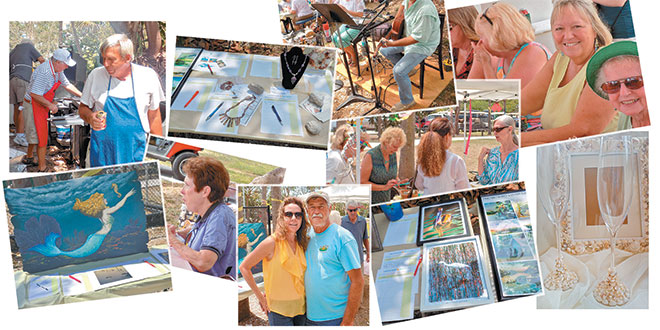 On April 2nd, the Goodland Civic Association put on its 4th annual Spring Fling, the immensely popular town barbecue where guests need bring nothing but their appetites. “It is our way of wrapping up the season and thanking our members and friends for their support during the year,” said GCA President Greg Bello. Bello, who chaired the event, estimated more than 350 in attendance.

Lou Van Meter, Lynn Albee and Richard Welsh cooked the food donated by Goodland’s excellent restaurants (plus Kirk Fish Company). “We cooked over 500 [total] hotdogs (from Little Bar), and hamburger patties (from Old Marco Lodge),” noted Van Meter, “Quite a few guests had one of each.” In addition to the burgers and hotdogs, servers Glen and Joan Lester, Pat Albee, Bev Boggs, Jeanne Steele, and Cindy Bello also offered up coleslaw and potato salad (from Marker 8.5), Cajun shrimp (from Kirk Fish Co.), and sweet potato fries (from Stan’s Idle Hour).

The setting for all this was the beautiful pavilion, in Collier County’s Margood Park, in the center of Goodland. The pavilion is set in the shade of two rubber trees, one of which arises from an ancient spring (still working – barely), possibly used as a watering place for Spanish explorers and certainly for the Calusa Indians before them. Who wouldn’t want to linger here – especially if a pretty good blues band is serenading the crowd throughout the afternoon? The Richmonds, Jess and Vicky, who appear regularly at the Lodge and Little Bar, donated their musical talents, while everyone ate and chatted. “The love shown by the Goodlanders made a deep impression on us,” said Vicky, “We decided to donate our tips to the Roths.” A fundraiser would be a new twist for the Fling. Normally, the GCA and local restaurants bear the entire expense for the barbecue. Guests leave their wallets at home. This year however, just days before the Fling, a tragedy struck two residents, who needed help getting through it. At the last minute, the GCA decided to run a fundraiser at the site of the barbecue.

A couple weeks before the Fling, one of our long- time residents, Carolyn Roth, suffered a stroke, paralyzing her left side and drastically affecting her speech. Carolyn and her husband Richard have been coming here since the mid-eighties. They are both active in our community and are beloved for, among other things, hanging Christmas stars and Easter eggs along Goodland Road in honor of their deceased children. It was going to cost a lot of money to get Carolyn back to Michigan and into another rehab center there. They had to be back in time to open up the Roth’s small summer time business, Riverside Acres. The business consists of six rental cabins along the Platte River (Honor, Michigan) in northern Michigan. The trick was to get Carolyn up to Michigan 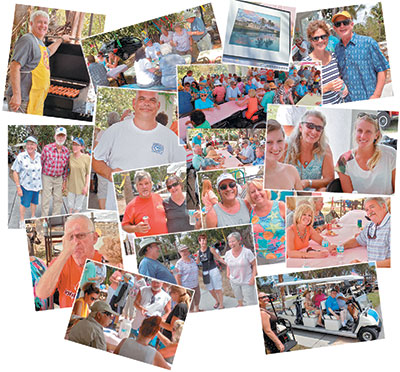 within 24 hours of notification of an available rehab center bed. The logistics were daunting. So was arranging for a fundraiser in the space of a week or so. With the help of local artists, Sherri Morrison and Judy Wittwer, most of Goodland’s resident artists donated some of their finest works, paintings, photographs, crafts, and jewelry to be sold at silent auction. The items were displayed on five tables next to the pavilion. They drew a lot of attention. Each item had its separate silent bid sheet. Almost $4,500 in checks were written by the winners of the silent auctions. Another $1,607 in cash came in, through the raffles and donation jars. Everyone apparently gave their might. One hundred and three one-dollar bills showed up in the collection and raffle jars. Altogether $6,252 was raised – a remarkable sum on such short notice. Well, maybe not remarkable for Goodland. This, in a tiny unincorporated community of an estimated 800 souls in the winter and only 125 to 400 (depending who you ask) in the summer. News gets around fast here. We like each other and are fiercely proud of our way of life and of our neighbors who make it such a friendly place. There are many acts of kindness which don’t make the newspapers.

Rich Roth was stunned and overwhelmed by the community’s generosity. “I didn’t expect anything,” Rich told me, “I am at a loss for words.” He tells me that Carolyn is improving in rehab, but getting her into a comparable place in Michigan is proving to be problematical. “It is going to require a lot of money and some luck,” he said, “This money will definitely remove a lot of the stress [connected to the move]. Carolyn and I don’t know how to thank everyone.”

As of this writing, I am happy to report that Carolyn is now ensconced in room 603, Grand Traverse Pavilion, 1000 Pavilion Circle, Traverse City, MI 49684. She is receiving expert rehab and is starting to walk with the aid of a walker. Her speech is also improving. “When she can consistently walk on her own (even with the aid of a walker), I’m going to bring her home,” said Rich, “It shouldn’t be long now.”

And so ends another Goodland community-wide fundraiser – the third in the last year and a half. In that time, Goodlanders have dug deep to come up with over $35,000 to aid those of their neighbors who needed a hand up. We are a tiny community, but we take care of our own. If you are lucky enough to live here, you will know what I mean. Every day is a good day in Goodland.

Barry was a practicing attorney before he worked as a Special Agent of the FBI for 31 years.  Barry worked for several government agencies another ten years before retiring to Goodland in 2006. Barry is presently the Secretary of the Goodland Civic Association