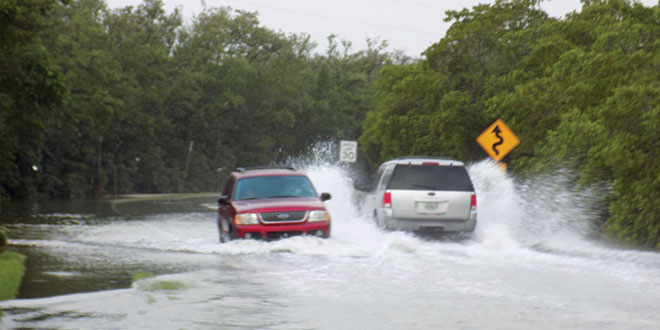 January 17th brought another day of flooding on Goodland Road.

“A policy of only repairing potholes and blocked drains is not a maintenance program.” – U.S. Army Corps of Engineers

A discerning engineer would have foreseen coming trouble as Goodland Road was first being built. In November 18, 1992 a newspaper (Eagle) explained how it was done: In the early 20th century, Samuel Petit, his wife, five sons, and two daughters settled in what was then known as Goodland Point. He found the farming to be good in soil underneath a 40-acre Indian shell mound. At that time, the only way to get to either Marco Island or Goodland Point was by boat. Petit seemed to be content with that. In 1938 everything changed when SR 92 (San Marco Road) was opened, connecting Marco Island with the mainland. The road, however, bypassed Goodland Point. This didn’t set well with the Petits. Harry Petit, one of Samuel’s sons, petitioned Collier County to build a road from SR 92 into Goodland Point. One can imagine the County Commissioners balking at this expense for only a handful of settlers. Harry Petit must have been a persistent burr under the county’s saddle, for an unusual bargain was struck with little risk to the county. If Harry Petit could build some kind of road himself, the county would come in and “level it off for him.”

Katherine “Kappy” Kirk (Tommie Barfield’s niece) told the Eagle reporter what happened next. “Harry lashed together some 55 gallon gas drums and put a platform on [them]. [On top of the platform], he installed a washtub so he could carry the shells. He floated it from [what is now Goodland], (probably the lagoon area behind Drop Anchor) to [where the road

is today], full of shells and put them between already existing shell mounds to build a road. He did that every day, [ringing] the trees to kill them.”

With evident admiration, and probably a sense of awe, Kappy concluded, “He built that road singlehandedly. It was pure determination.” Goodlanders today are still known for their grit and determination. It began with Harry Petit. The Eagle reported that the county later hard surfaced the road as promised. There was no mention of installing a proper sub-base beforehand. The county’s promise to level off the road seems to imply that they shaved off the tops of the shell mounds to bring it down to the level of the lower reaches, between the mounds.

Harry Petit’s route of the road, from one high point to the next, resulted in a quaintly and somewhat old fashioned curvy road, winding through the mangrove forest. It has since endeared itself to those who travel it. It also meant that large portions of the road were below the level of the shell mounds, which Petit used to chart his course. However, it served the population of five families well until, in 1949, as the Eagle reported, “The Barron Collier Corp. offered to move everyone in Caxambas to Goodland Point if they bought their own lots. The corporation paid for the lots and the residents had three years to pay them back.” The population quickly increased from five families to 100 residents and 25 houses, plus a fish house, grocery store, and post office (moved from Caxambas where it was the Collier City South Post Office). It became the Goodland Post Office; Goodland Point became history.

Today Goodland is said to have over 400 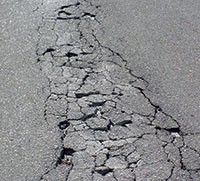 permanent residents, ballooning to 800 in season. It has also added four popular waterfront restaurants, a fish market, two marinas, and a county boat park. Many of our residents have established businesses in Goodland. All of our businesses are totally dependent on Goodland Road for delivery of all the supplies they require. All manner of trucks (some as big as 18-wheelers) rumble back and forth on the road. Two excellent boat ramps draw fishermen from near and far. Goodland is, after all, in the fabled 10,000 Islands – some of the best fishing in Florida. The fishermen come with some heavy boats in tow. School buses, as many as two or three, also navigate Goodland Road twice a day on weekdays. The navigation requires some adept driving, in an attempt to evade the many potholes in the road. When a trailered boat hits a pothole, it sounds somewhat like a muffled cannon going off. Add to this the thousands of revelers who come to Stan’s, and to eat in our high quality and picturesque restaurants, and you can almost hear the groans of Goodland Road from the pounding it is taking, and the neglect from which it can’t recover.

SR 92 (San Marco Road) and CR 951 (Collier Boulevard) also wend through mangrove wetlands. The traffic on Collier Boulevard is quite a bit heavier than that on Goodland Road. Yet neither of these roads suffer the deterioration which Goodland Road experiences. “It’s the water,” says Steve Morgan, a Goodland resident and licensed civil engineer, “Water has inundated the roadway base. The base of the road today probably consists mostly of the shell material placed when the road was built.” Morgan goes on to explain 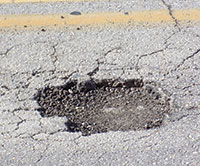 that the road is now being saturated by the water from below, and from water that covers the road during certain high tides. The lack of maintenance (ignoring severe cracking to the asphalt surface for long periods of time) has left the base material vulnerable. Water traveling upward and downward through the base material has weakened it – resulting in the near-complete failure of a majority of the roadway. As traffic passes over the road, the base material is pumping due to saturation, displacing the asphalt course(s) above. “It is like when you are walking on water saturated soil,” explains Morgan, “As you step onto the soil, water rises and falls on either side of your feet. The same thing happens when water saturates base material under pavement: traffic loading expands and contracts the base causing the asphalt to separate and break apart. That is exactly what is happening here.” Now that frequent flooding of the road has been added to the mix, deterioration has accelerated to a startling degree. Additional potholes, cracking, and crumbling are evident every time I walk the road.

The City of Marco Island has been dealing with isolated pothole repair only. When the potholes become too numerous to ignore, a Marco crew comes down for a quick fix. They shovel either hot or cold asphalt mix into the pothole, tamp it down, and move on to the next hole. “Throwing asphalt into a hole in that road is not the answer,” says Morgan, “The road’s asphalt surface course is disintegrating. Filling potholes in a failed road is like putting a Band-Aid on a compound fracture. It does nothing to deal with the underlying problem.” Even the Band-Aid is not 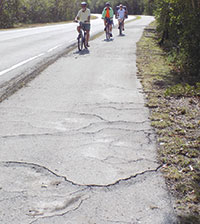 On November 13, 2015, Coastal Breeze News published my article about the deplorable condition and neglect of Goodland Road. Within a couple weeks, the potholes were patched as described above. By January 24, 2016, most of the patches were gone, and additional potholes, cracks and crumbling had formed. More photos were taken on January 16, January 26, and February 7, which appear with this article.

For at least the last 14 years, the Goodland Civic Association (GCA) has spearheaded attempts to get the City of Marco Island to: 1. Adequately maintain the road; 2. Raise the elevation of the road; (or) 3. Turn the road back over to Collier County.

As secretary of the GCA, I am well aware of all the unrelenting work that has been done to get the city off the shnide (as Chris Berman would say) and fix the road. Now, the city is finally facing the fact that Goodland Road actually serves only a few of its constituents, and that it does need major work which may be beyond the city’s resources. They have begun preliminary talks with Collier County, which may result in the county taking back Goodland Road and fixing the problems that are rapidly destroying it – hopefully before an emergency during a flood tide makes this a whole different story.

I would like to think that Harry Petit is somewhere cheering us on and smiling with approval as Goodland strives to finish the job he began 78 years ago.