Goodland Road, all but impassable – Again! 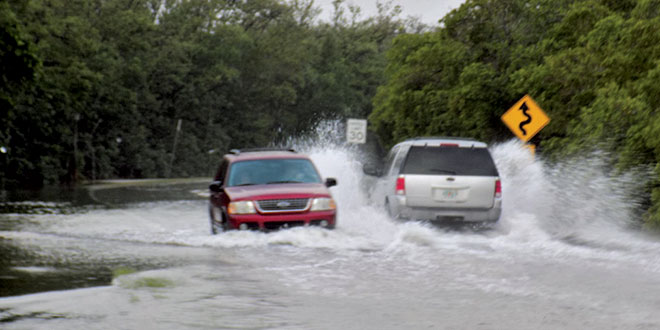 In four out of the last six months, the only access road into Goodland has been inundated by rising tides – over 18” deep in spots. In August, September and October 2015, the only apparent causes for the flooding (which recurred for four or five days each time) were spring tides, the days otherwise sunny and calm. On Sunday morning, January 17, 2016, there was no spring tide. According to local tide charts, high tide at 7:35 AM was 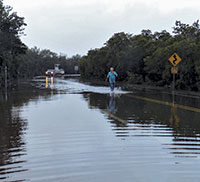 Tom Barrett on a rescue mission to a Goodland friend. His cab driver refused to drive on Goodland Road (7:45 AM, 1/17/16). PHOTOS BY BARRY GWINN

unexceptional and forecasted to be lower than a high tide later in the day. This time an unnamed storm, which moved quickly through Goodland at 5 AM, was a contributing factor. For whatever reason, Goodland Road was flooded again – the worst I have seen in my ten years here. This time, I saw a man plodding through the water. He said his name was Tom Barrett, and he had come down in a cab from Marco Island. He was trying

to reach a friend on a “rescue mission.” His cab driver refused to bring him over the flooded road and made him walk the last mile into Goodland. 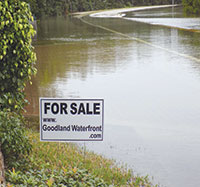 Ironically, Waterfront real estate advertised at what is becoming the new waterfrontin Goodland (8 AM, 1/17/16).

elevating the road, the city has been stalling. It claims lack of funds and inability to overcome opposition from the Conservancy of Southwest Florida. Collier County Commissioner Donna Fiala, who represents Goodland, has become involved, and there is finally some movement to address this worsening situation. This month, the city council has agreed to sit down with the county for the purpose of discussing the return of Goodland Road to the county. Meanwhile, we have to keep watching our access road periodically disappear beneath the Gulf waters.