Goodland Does Christmas: It Is Intimate, Poignant, and Personal 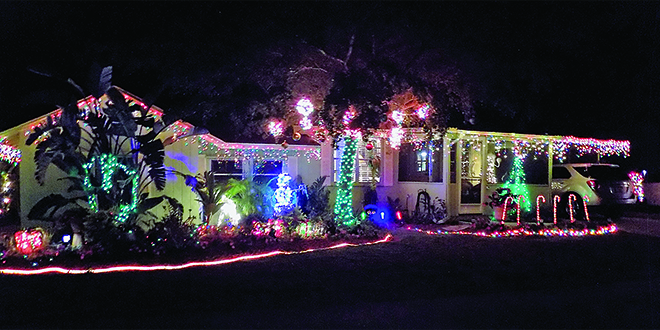 During the holidays, you can watch (on TV) a blockbuster parade in New York, listen to the Mormon Tabernacle Choir, or enjoy a performance of the Nutcracker Suite. Closer to home, we have a truly fabulous Christmas parade in Marco Island. People start reserving their spaces a week before the event. Down here in Goodland, on the southeastern tip of Key Marco (as this island was dubbed by the Spanish) we have our own way of celebrating the holidays. Each in his own way contributes to the celebration of Christmas, reminiscent of the small towns we came from. Few if any out of towners come to see what is going on then, but we know the names of everyone who does come. They are our neighbors and friends, and we are glad to see them.

The festivities began this year at 10 AM Tuesday, December 13, on Goodland Road. For about the last 20 years, Carolyn and Richard Roth have decorated the mangrove trees along Goodland Road with shiny silver stars – the entire length of the road. The stars are hung to commemorate the untimely and tragic late 70s deaths of the Roths’ teenage daughters, Mary Beth, 17, and Pam, 19. “Mary Beth was born on Christmas Day,” Carolyn told me, “After Betty Bruno got the city to build a bike path (1992), we noticed how many people enjoyed walking along it. I thought this would be a lovely setting for a memorial to our daughters. (Mary Beth died on Easter Sunday. The Roths hang Easter eggs along the path each April.) “I picked stars because we can see them every night in the heavens. It was a star which led us to the Christ Child.” And so, the Roths got busy and constructed hundreds of aluminum stars with strings to hang them up by. Each December, for the past 25 years, with some help from their friends, they have been hanging them up, hoping that passers-by would write the names of departed loved ones on a star of their choice. “These stars would be a good memorial for anybody who had lost someone,” Carolyn said, “The stars can jog memories every year. Besides, it’s fun when you come into Goodland and see the [twinkling and glittering] stars.” For a while, it looked like there would be no stars this year. Carolyn suffered a debilitating stroke last April, all but paralyzing her left side. Returning to Michigan shortly thereafter, she was admitted to a reputable rehab facility, which did what they could. As November rolled around, she still had not regained the ability to make her left side do what she wanted it to do. The stroke had left her in a weakened condition and easily exhausted. I asked her why she would put herself through the ordeal of plane travel rather than continue with the rehab in Michigan. “I have so many friends here,” she said, “They are special and Goodland is special. It is where I wanted to be.” Eighteen of those friends showed up to help on Tuesday. They were once again led by Carolyn, using a walker and wheelchair this time. The silver stars will greet our visitors for another year. Carolyn is happy to be back.

At noon, I found Mary Miller and Bill Price stringing lights on two 11-foot noble fir trees, on either side of our “Welcome to Goodland Sign.” Jack and Mary Miller, along with Price, have been doing this for years. The trees come from western Oregon and Washington by truck and were delivered to Heath Christmas Trees of Naples and Ft. Myers. Jack and Bill help out over there each Christmas and in return have persuaded the owner to donate a couple trees to Goodland. This year and last, they brought over a third tree, a 15-foot noble which they 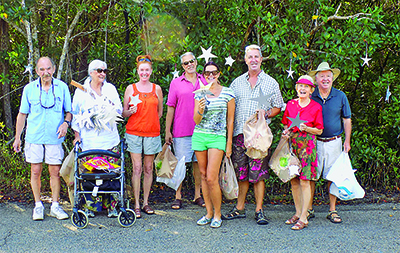 erected in the Margood Park pavilion. It serves as our community Christmas tree. Price estimates the value of the three trees to be about $300. The Millers bought new lights for the trees this year. “This sign is the first thing that people see when coming to Goodland,” Mary said, “We wanted to show the warmth of Christmas to all who visit us.” They are indeed a lovely sight and source of pride. Each night at dusk, a timer illuminates the welcome sign and turns on the tree lights. There is one more resident who contributed to this welcoming scene. Danny Mootispaw, who lives on a boat near the Goodland Bridge, painstakingly hand washed the grime, which had accumulated over 14 years.

Then, at seven that evening, Goodlanders brought themselves and their decorated carts to the Margood Park pavilion to decorate the 15-foot noble fir, turn on the tree lights, and sing Christmas carols. The pavilion, built by Collier County in 2011, sits at the foot of a grassy knoll, beneath two beautiful rubber trees and a canopy of stars. It was the perfect setting for this laid back and intimate Christmas celebration. A gentle balmy breeze was was drifting through under a full moon. About 40 friends and neighbors showed up. As is often the case in Goodland, I knew almost all of them. Many watched from their golf carts parked on the grassy knoll, while others gathered in the pavilion. Before the carol sing, someone was broadcasting Christmas songs from their decorated golf cart. It turned out to be Malcolm and Michelle Colley, seasonal residents from Nottingham, England. They are stalwart Goodland Civic Association (GCA) members and never miss meetings when they are here. “We have nothing like this in England,” Malcolm said, “This is another reason why we love Goodland so much. We really wanted to be a part of this.” All was dark when the tree lights came on, quickly followed by cheers from the celebrants. All joined in the subsequent carol sing, including many whose voices had long ago seen their best days. It didn’t matter. The strains of “Silent Night” seemed appropriate and moving in this setting. It was Goodland being Goodland. We could not help but join in, in celebration of Christmases we used to know, and of the town we had grown to love. It was a beautiful evening.

Finally, after the pavilion celebration, the decorated golf carts were formed up and judged in the Margood parking lot next door. It was a tough call for co-chairs Greg and Alicia Cameron. The residents are fond of their golf carts (never used for golf, but frequently used to run errands in Goodland or just to cruise around the town on Sundays), and the decorations were elaborate. Following that, the golf carts paraded, single file, through the streets of Goodland.

Long before any of this, lighting displays began bursting forth on the quaint throw-back homes in the village, many dating back to the 1930s and 40s. The homes make ideal frames for the Christmas lights and are worth seeing. Four years ago the Goodland Civic Association began awarding prizes for the best displays. On the evening of December 15, a GCA panel of experts made two passes through the village to determine the three most outstanding lighting displays. More homes than ever were lighted up this year, which made it harder to pick the winners. It was heartwarming to see the effort put forth by the residents. The streets were silent and unlit except for the Christmas lights and the full moon.

One response to “Goodland Does Christmas: It Is Intimate, Poignant, and Personal”