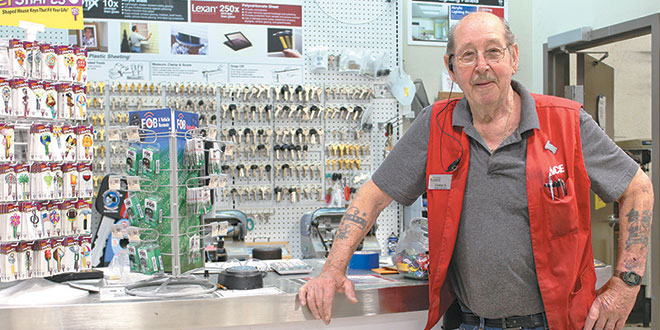 Photo by Samantha Husted George on his last day at work.

After 27 years, George Shaler is officially retiring from his job at Sunshine Ace Hardware on Marco Island. In the almost three decades that George has been an employee he’s seen a lot of changes. The Island for instance was a completely different place back in 1989 compared to now. Technologies have come and gone and George has remained, witness to it all.

“This is the third owner I’ve been through,” said George “I was with the first guy for two years, the second guy for 14 years and I’ve been working 11 years with Ace.”

George just recently purchased a mobile home in his hometown in Northern Michigan. He plans on traveling back and forth

Submitted PhotoGeorge and friends at his retirement party.

between there and Frostproof, Florida. He hopes in his down time to improve his shuffleboard game and relax.

“When I first started here I was a floor person, waiting on customers,” said George. “From there I went into the Receiving Department and still worked the floor but helped them with the receiving. One day I was walking up the isle and the Duracell lady was asking where the manager was, she was talking to the boss’s wife and she said ‘well, here he is now’ and that’s how I was promoted.”

The employees at Sunshine Ace Hardware held a retirement/farewell party for George. Co-workers, longtime friends and even a band came out to celebrate his long tenure at the hardware store. Good luck, George!