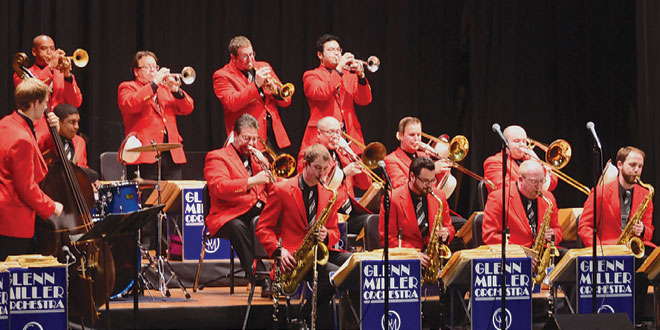 Question: Which big band holds the Guinness World Record for the Largest Dance?

Answer to both questions: The largest dance was 25,000 people; the first Gold Record was Chattanooga Choo Choo; and the band was Glenn Miller, arguably the best of the big bands.

Sunday’s audience, though, did not dance. They tapped their feet. They sang the fanciful lyrics. They enjoyed the familiar music of their youth.

These light-hearted lyrics were combined with intricate harmonies and driving rhythms, choreographed movements of the saxes, trombones and trumpets, and augmented by audience participation. This was and is big band music at its best.

Today’s Orchestra Director, Nick Hilscher, is in his second year with the band, and some of the band members have even less time on board the Choo Choo, but they were all very good. Every band member played at least one lead solo with impressive technique and style. Yet, the soloists play in orchestra as one. Director Hilscher is the male vocal soloist.

They packed the two-hour concert with great entertainment, beginning and ending with the Glenn Miller theme “Moonlight Serenade” and filling the in between with Miller classics like “A String of Pearls” and “Little Brown Jug,” as well as songs from other big bands and more modern pieces.

This concert was one of many band fund raising events arranged by Lely High Band Director, John Stein, a resident of Marco Island. Funds raised will allow Director Stein to buy music and repair instruments. He also commented that he’s been able to use the concert as an educational opportunity for his students. The band students and many of their parents, Lely Band Boosters, worked the concert, directed parking, selling tickets and ushering the house.

To inquire about future concerts and to get on a list to be contacted in October email John Stein at steinjo@collierschools.com.