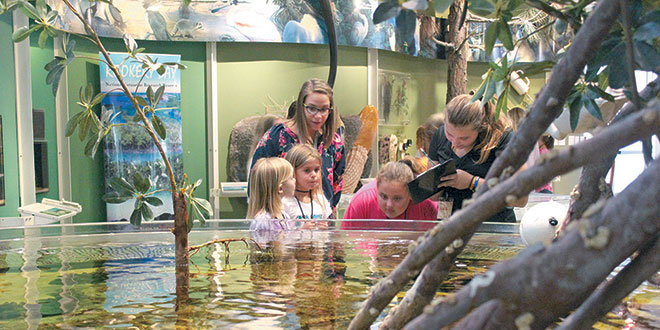 The girls examined the tank while searching for clues. Photos by Samantha Husted

The Rookery Bay Environmental Learning Center had been transformed. Pink sleeping bags littered the floor, green ribbons were strewn about decoratively, and in the background the musical styling of Taylor Swift could be heard. On June 11th over 20 girls, ages 8-14, trickled into the Environmental Learning Center ready for a night of learning and fun. This was Rookery Bay’s third slumber party event. 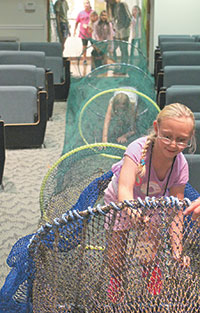 During the turtle obstacle course the girls had to pretend that they were turtles navigating the sea.

in Collier County. “We did a big report looking at what kind of offerings were available for children,” said O’Boyle. “We realized that there was a big gap for sleepovers and overnight options for middle school-aged students.”

Sleepover events have long been popular in big cities nationwide as well as other areas of Florida. When O’Boyle and Windsor realized there was a market for it, they decided to bring the fun to Naples. “I come from a strong background of doing programs with kids,” said Windsor. “I’m always looking to do something new and something that’s not out there yet.” 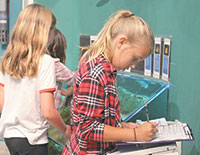 After finding a clue a slumber party goer marks it off her checklist.

works as a means of promoting stewardship and education for the younger population. It combines fun activities with educational exercises in order to create a sense of community for children interested in the environment. At each event participants are presented with research conducted by the Rookery Bay staff, allowing them to gain a better understanding of how environmental centers work. Previous events have even included dissections.

“We have an awesome facility,” said Windsor. “We said, ‘we should really try and do a sleepover because this community deserves it.’ We love working with the kids.”

The theme for Saturday night was all about 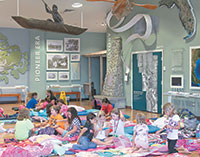 Pink sleeping bags were scattered across the upper level of Rookery Bay’s Environmental Learning Center as the girls settled in for the night.

the changing seasons. “We’re talking about nesting turtles, why the frogs are calling, and also about the wildflowers that are blooming,” said O’Boyle. “Those are our three main topics.”

The night began with an icebreaker. The girls gathered in a large circle and were asked to mimic a specific creature or plant life that they were given on a card. Each girl had to find others who also had that same creature. It was like a very chaotic game of charades. After finding their kin the girls settled into their new small groups. They were given clipboards and free reign of 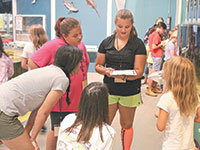 the Center and asked to complete a scavenger hunt.

Afterwards it was time for the much anticipated turtle obstacle course. The lecture hall was fitted with long tubing meant to mimic the netting sea turtles often have to navigate. There was also a fishing line portion that the girls had to crawl through and currents they had to work against. The night continued on with snacks, more games and activities, and special guest speakers.