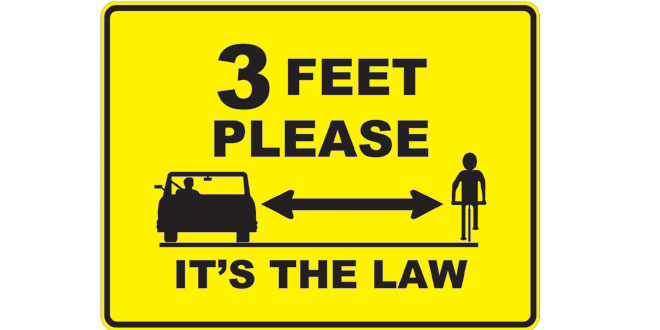 Two articles in a row with some great musical references and I haven’t even mentioned “Bicycle Race” by Queen. Not sure how long I can keep this up. This reference, however, may be the most important I will refer to in any article because it pertains to safety and the law. When you think of 3 feet it really doesn’t seem that much, especially when you see some athletes and even young kids nowadays that are 6 feet tall at 12 years old, but to those of us who bicycle on the roadways (where we are legally able to do), 3 feet means a lot.

Most bicyclist are aware of the positives and negatives of riding on the side of roadways as well as the laws associated, but it is necessary for us to do so at times and very legal as long as we abide by those certain laws and rules which I will mention later. As some bicyclist know, at times it is very difficult to ride on sidewalks when you are either alone and cycling at speeds well over 10mph, or even in groups of cyclists where speeds can reach well over 25 miles per hour. Recently, at the City of Marco Island’s ad-hoc bike path committee, safety seemed to be the hot topic and a few of Marco Island’s fellow cyclists were on hand to voice their concerns.

In Florida, the bicycle is legally defined as a vehicle. Bicyclists have the same rights to the roadways and must obey the same traffic laws as the operators of other vehicles. These laws include stopping for stop signs and red lights, riding with the flow of traffic, using lights at night, and yielding the right-of-way when entering a roadway. It is also the responsibility of the bicyclist to yield the right-of-way to any pedestrian and shall give an audible signal before overtaking and passing such pedestrian, a bell or horn usually works best.

The following rules shall govern the overtaking and passing of vehicles proceeding in the same direction, subject to those limitations, exceptions, and special rules hereinafter stated:

The Island is growing and cycling on the Island is becoming quite popular as a means of exercise, commuting and even shopping. So as motorists and pedestrians we must be aware and educated as to the rules of the road as it pertains to cyclists as well as cyclists knowing the same laws and rules. As I stated earlier, it is legal to ride your bicycle on the sidewalks but remember when bicycling on a sidewalk or crosswalk a cyclist has same rights and duties as a pedestrian. There is only so much Marco can do with the infrastructure we have to accommodate all forms of transportation, so let’s be courteous with each other and SHARE THE ROAD!!

Here are few other safety tips and laws that may help in your safe and enjoyable riding experience around Marco Island and elsewhere.

1. Mirrors- a handlebar, eyeglass or helmet-mounted mirror is nice to see traffic or other riders who may be approaching from behind.

2. Some sort of bell or horn to alert other riders and or pedestrians you are approaching.

4. LIGHTS are required when riding at night, no exception!!

5. Helmets are required for those 16 and under, but SMART for all!

6. When in the roadway. ride with traffic NOT against it.

7. Check your bicycle prior to each ride

8. Use hand signals for making turns or stopping or even slowing down.

9. DO NOT wear headphones.

Matt Walthour, a Marco Island resident since 1985 is a graduate from Embry Riddle Aeronautical University, and is the owner of Island Bike Shop and Scootertown on Marco Island and Naples. He is also a member of the Marco Island bike path ad-hoc committee.