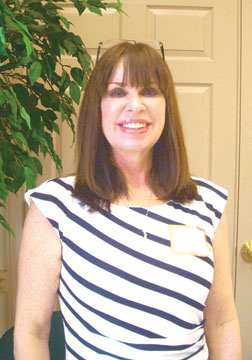 Suzanne Barr was told by a critique group that her first book was garbage. Then a bestselling author bought that very book and it made the New York best seller list for six weeks. If that doesn’t give the writers of this world encouragement, I don’t know what does.

Thank you, Krista Santora, for inviting Suzanne Barr to speak at the Marco Writers Group which met on Wednesday, March 14th. As a ghost writer for a top selling author, Suzanne gave us insight into another avenue of writing most of us knew little about. Ghost writing is a fascinating, fast paced field where Suzanne cranks out several novels a year. A writer’s name can become a brand in itself and readers flock to purchase anything under that name. When that writer either cannot or chooses not to keep up with the demand, writers like Suzanne step into their shoes and keep Joe-public satisfied with yet another piece by our favorite writer. Suzanne now has twenty novels that have hit the New York best sellers list. She has also published works under her own name. The latest, titled “Fatal Kiss”, is the true story of a North Carolina woman who murdered her four year old stepson.

Southwest Florida is booming with talented authors, publicists and writers. The Marco Writers Group is a networking forum that encourages everyone to bring out that story burning a hole in your soul. Through the speakers, by sharing our personal victories and defeats, and inspiring each other to keep plugging away, we take another step forward in the life of a writer. The group is open to the public and we invite you to attend a meeting, get motivated, and write. The next meeting of the Marco Writers Group is Wednesday, April 11, 2012. Marty Ambrose, writer and publisher of The Mango Bay Mystery Series and Avalon Press will be our guest speaker. We meet at the Fifth Third Bank on Elkcam Circle (next to the post office) 5:30 PM.