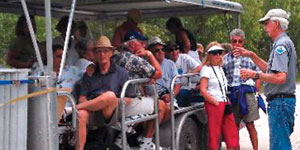 After carrying more than 300 passengers last month, the new “Ghost Rider” tram operated by the Friends of Fakahatchee has extended its service into April. The tram service is named in honor of the famous ghost orchid found in the park. The 24-passenger tram frees visitors from having to concentrate on their driving rather than the features of the park. A naturalist leads each tour, describing the history of the Fakahatchee Strand and describing the plants, birds, and animals that thrive there. Several stops on each two-hour tour will give passengers a chance to explore interesting aspects of the park.  “Our tour guide was fantastic,” said one recent rider. “He was so knowledgeable and informative. We 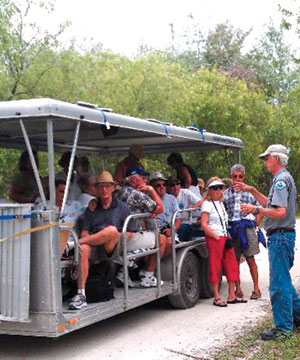 learned so much about the history, culture and native environment of the area. We can’t thank him enough.”   “Ghost Rider” tram tours are $25 per person and advance reservations are required. The tram leaves from the ranger station at 137 Coastline Drive in Copeland, FL at 10 AM sharp. Passengers should arrive at 9:45 AM. Tours are offered on Tuesdays and Thursdays in April, through April 25th. The dates are April 2, 4, 9, 11, 16, 18, 23, and 25. To make reservations, go to  www.orchidswamp.org and click on “events.” To reserve by phone, call Pam at 239-695-1023. The entrance to Fakahatchee Strand Preserve State Park is located on the west side of SR 29 approximately 14 miles south of the intersection of I-75 and SR 29.