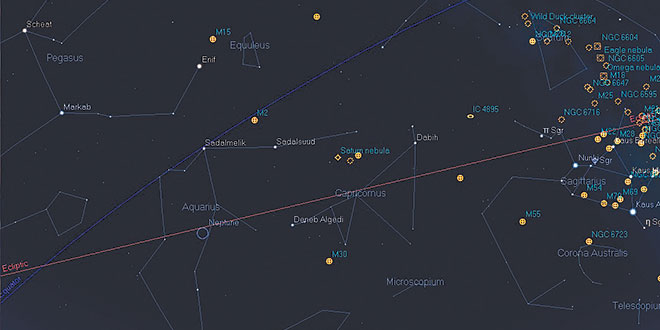 Facing Southeast, 11PM August 22nd. The bright star Fomalhaut is a relatively close neighbor of the Sun and seems to have a planetary system around it. SUBMITTED PHOTO

Capricornus, the goat, is the second faintest constellation in the zodiac after Cancer, but it is rather easier to pick out than its near neighbor Aquarius. Capricornus is framed by several modestly close pairs of stars which are quite noticeable once initially located. This constellation is usually referred to as a goat, but classic drawings of Capricornus show a sort of hybrid creature with goat forequarters and a fishlike tail. This makes Capricornus a member of “the sea” — a term covering a large patch of sky which contains constellations with a water theme. Aquarius (the water carrier) and Piscis Austrinus (southern fish) are two other members of the sea shown on tonight’s chart, but there are several others.

As mentioned previously, nearby Aquarius is a bit harder to pick out of the sky than Capricornus even though the stars are a tiny bit brighter; the problem is they are more spread out. Aquarius has a number of deep sky objects to fascinate the advanced stargazer, but only a few are visible with binoculars. Of these, the globular cluster M2 is one of the best and brightest in the sky. The cluster spans a bit less than half the apparent width of the full Moon and is rated at magnitude 6.5. Very similar to M2 is the nearby M15 (actually in Pegasus), which may be easier to find as it is fairly close to the bright star Enif.

A temporary visitor to Aquarius is Neptune, although it’s been there four years already and it will be another eight before it finally moves into Pisces. Neptune is the slowest and furthest planet from the Sun, taking something like 164.8 years to complete its orbit. About magnitude 8, Neptune is easy to see with a pair of binoculars — the problem is identifying it. A dedicated observer with a computerized star chart should be able to locate it among numerous similarly dim stars. This accounts for its late discovery date of 1846. In fact, Neptune’s existence was predicted before it was seen based on Uranus’ orbital peculiarities. A dedicated telescope search then revealed the planet.