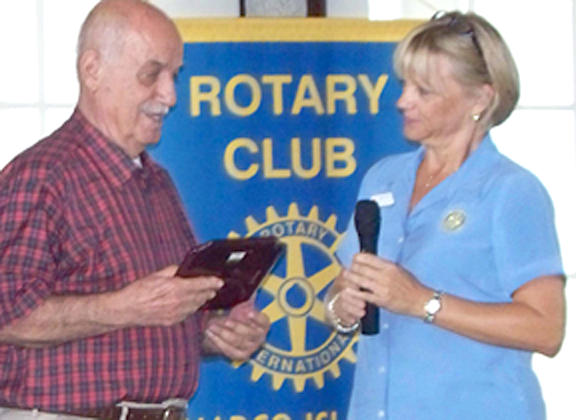 When asked how does he think of himself; George says, “I am a perfectionist.  Sometimes I don’t meet my goals—but I always try my very best.” When asked what Rotary means to George, he replies, “SERVICE ABOVE SELF.”

The Noontime Rotary Club of Marco Island has bestowed its highest honor, that of Honorary Membership, on long time member George Majdalani.  Cindy Love, club president, said recently at his induction; “George Majdalani, you have been chosen for Honorary Membership because our members believe your commitment to this club over the years warrants this recognition… Congratulations!”

George was born in 1928 in Jerusalem, Palestine, to a national railway station master and his wife. Two days later his family moved to Haifa where he spent his youth. As a little boy in Haifa, he one day walked past a sign on a building.  The sign held the image of a factory cog wheel and the words, “Rotary Meets Here.” He asked, “What is this Rotary?”

“Oh that is British! Only important business people are Rotarians.” George said to himself, “Some day.” Four decades later in Toledo, Ohio, his dream was to come true.

At the age of 9 he entered Jesuit boarding school in Haifa where he was graduated with the equivalent of a high school diploma at age 17, in 1945. A year earlier, his father had died and it was George’s job to support his mother and six sisters.   He worked after school during his last year of school and still managed to graduate on time. After that he worked two jobs from 6:00am-mid-night to try to make ends meet for his family.

George went on to become an expert in international shipping with companies such as Iraq Oil Company in Beirut, Lebanon, and later Aramco in Saudi-Arabia. Aramco paid for his college education. George took correspondence courses and night classes with the University of Maryland Extension out of Munich, where he received a Bachelor’s degree in Management.

George and his wife Rose and their two small children moved to New York City in 1967 and on to Toledo, Ohio, in 1969, where he remained until retiring and moving to Marco Island in 1995. He first joined Rotary in Toledo Ohio and transferred to the Rotary Club of Marco Island upon his Retirement.

Older members remember the years In the late nineties when he managed the check-in desk.  He always greeted members and guests with a humble smile, a kind word, and he always remembered everyone’s name.

George was Sergeant-at-arms from 1997-2001. He was honored by being selected Rotarian of the Year in 2001 and he received the Service Above Self Award in 2003. Until his eyesight failed he was able to accumulate a total of 28 years of perfect attendance in Rotary.