Gators and Skunk Apes and More, Oh My! 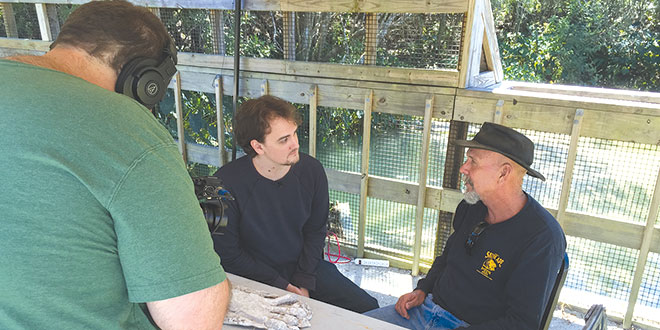 Recently, “Orlando Attractions” magazine and show did a segment on the popular 110-acre Gatorland in Central Florida. The show included an interview with our own backyard neighbor, Dave Shealy, leading Skunk Ape researcher from the Skunk Ape Research headquarters in Ochopee.

“It was just luck that Dave was there to speak at the same time we were filming,” said Matt Roseboom, publisher/producer of “Orlando Attractions.” “Just days earlier, the receptionist at Gatorland reported receiving several phone calls from guests inside the park saying they were seeing something ‘incredibly unusual’.”

The guests at Gatorland spotted what they thought was a Bigfoot — or its cousin the Skunk Ape — while visiting the park. In fact, it was in a section of the park that is ideal Skunk Ape habitat (as is much of Florida). Gatorland, known as the “Gator Capitol of the World,” has thousands of alligators and crocodiles, a free-flight aviary, petting zoo and offers many one-of-a-kind animal shows, all in a natural 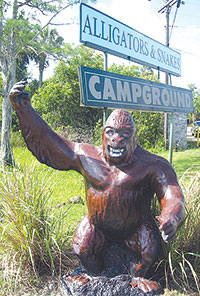 According to the Gatorland website, Mark McHugh, Gatorland president and CEO, said, “We were a bit amused at the first phone calls, but as the sightings became more frequent, we felt a full blown investigation was in order. We do not believe there is a safety risk for our employees or guests, since the creature appears to be quite shy. Our efforts are focused more on gathering scientific information to support the presence of this mysterious beast. We have discovered, however, that there is a large number of folks around the park that absolutely believe Big Foot or the elusive Skunk Ape is roaming our swamps.”

Gatorland has compiled a brief documentary on the subject and has added a bit of fun for guests who were encouraged to support the investigation by conducting their own Bigfoot research throughout the park last weekend. There was a “Bigfoot Tracker” scavenger hunt that featured different life-size 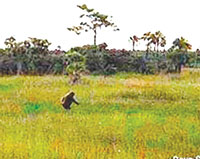 Sasquatch cut-outs hidden throughout the park. Participants had to find them, photograph them and post them to Instagram for a chance to win a $500 gift package.

Sightings of the skunk Apes, or swamp apes (as it is known for its foul odor), have been reported for many years. Shealy is considered an expert on the elusive Florida Skunk Ape with more than 40 years of in-field experience in the Florida Everglades. He also has created a new Skunk Ape Expedition for the most adventurous which is scheduled to be held between Thanksgiving and Christmas 2014, heading out from the Skunk Ape Research Headquarters in Ochopee. The expeditions are available for up to five people, and will include, food, lodging and entertainment and may include swamp walks, swamp buggies and airboats.

Shealy says, “This is a once in a lifetime expedition and includes an invitation to my home to try a home-cooked meal of frog legs or fish.”

For more information on the Skunk Ape expedition contact Dave Shealy at skunkapedave@gmail.com.