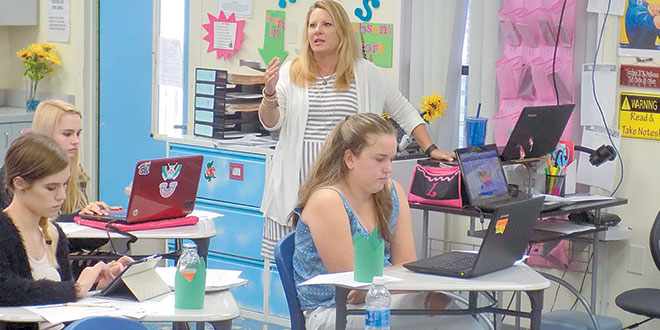 Lori Galiana at work in her classroom. Submitted Photos

Lori Galiana is the go-to person at MIA. Since 2013, she has been teaching World History, U.S. History (except this year), Government, Economics, and her favorite, AICE Global Perspectives to the kids at MIA. She is also the cheerleading coach, Key Club advisor, and National Honor Society advisor. Right now, she is coordinating a student travel group, which she will guide through Europe, this month. “Lori is one of our top performers, and she literally gives her all to us on a daily basis,” says Melissa Scott, MIA’s Principal, “She is one of the most dedicated individuals that I have come across in my eighteen years in education.” On March 4, 2016, Galiana was one of four MIA educators who personally received Governor Scott’s Shine Award, given to those educators who have proven inspirational to their students. The G.overnor actually came here to present the awards, which were given to the recipients in their classrooms, in front of their students.  The awards are doubly meaningful as they result from nominations by the recipients’ peers. The Shine award was only the latest of Galiana’s accolades.  In 2015, she was named Social Studies Teacher of the Year by the Veterans of Foreign Wars. In 2014 and 2015, she was recognized by the Collier County Supervisor of Elections as having achieved the highest percentage of high schoolers registered to vote.

And, in 2015, she was made an Honorary Kiwanian for her service with the MIA Key Club. The Marco Island Kiwanis Club has given more than 32,000 books to area students through their Reading is Fundamental program.

Lori is married to Alex Galiana (28 years), Recreation and Administrative Facilities Manager of the Marco Island Parks and Rec Dept. as well as Manager of

the Farmers Market in the city owned Veterans Park. They are both Florida natives. They have two sons, AJ, age 26, and Max, age 23. Both went to Florida State and graduated with degrees in Information Technology. Lori grew up in Inverness, FL, where, in 1982, she was a graduate of Citrus High School. She met Alex at the University of Florida, where she was pursuing a degree in Business Administration. Despite her mother’s entreaties, Lori had no desire to become a teacher.  Interrupting her education at UF, Lori and Alex moved to Chicago in 1986, where Alex had gotten a job as a commodities broker. While devoting herself to her children and volunteering at local schools, Lori got her degree in Business Administration from DePaul University. After 15 years in Chicago, homesickness for Florida and family brought the Galianas back to Florida. A friend recommended Marco Island where they have lived since 2001. Then things started to move fast. As a way to get to know the community, Lori began substitute teaching at Tommie Barfield Elementary and Marco Island Charter Middle School. Little by little, the schools called her in more often, until it became almost a full time job. “The more time I spent with the kids, the more I enjoyed it. It allowed me to build relationships and have an impact,” Galiana told me, “I started thinking about actually going back to school to get my teaching certificate.” She has since become certified in Social Studies, Business Administration, Marketing, Reading, Gifted, and Special Education. In 2002, MICMS offered her a fulltime position as History teacher and six years later, it was followed by five years at Gulf Coast High School. In August 2013, she began teaching at 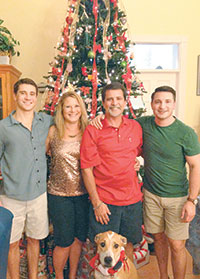 MIA. Things have never been the same.

I visited Galiana’s classroom on an April morning, this spring.  She was presiding over a junior and senior AICE Global Perspectives class. AICE, or Advanced International Certificate of Education, is written and overseen by the University of Cambridge in England, ranked as one of the world’s top five universities. As with honors courses, these classes cover more in depth and require individual research and initiative. MIA has incorporated the entire AICE curriculum. Galiana loves this particular class. “It opens the students’ eyes to the world,” she says, “They must find global issues, defend their sources, and write ‘true’ research papers. To top it all off, they must present an eight minute live presentations to an audience, explaining how and why their perspectives have changed.” That is what senior, Austin Estremera, was doing when I walked into the classroom.  He was in the midst of a power point presentation on the impact of Syrian refugees in the U.S.

Estremera was answering classmates’ questions, while others added comments on their own research and viewpoints. The resulting questions and discussion were facilitated by Mrs. Galiana. There was no arguing or attempts to win points – just an exploration of all sides of the subject being presented. I knew little about this subject and learned quite a bit in the short time I was there. I was puzzled by the fact that fully one third of the desks in this class were vacant. I learned that those students were taking AICE exams in another classroom (for which they would receive college credit upon passing). “The whole AICE program is based on critical thinking and writing using credible evidence, Galiana said, “It is so much more valuable in teaching kids 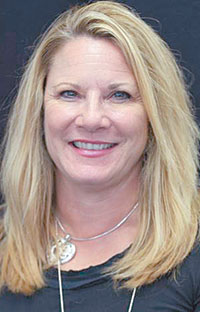 to communicate and not just repeat the nonsense they hear in social (and broadcast) media.”

This sounded like a lot of work to me. I can think of only two teachers who inspired me to such efforts. In my day (Nifty Fifties), I watched the clock and dozed through social studies classes.  I noticed no furtive clock watching in Galiana’s class, but I did see a lot of raised hands. Later, her students were eager to tell me what they thought.

Nate Snow is a senior and will be attending FSU next year as a Business or Actuarial Science major.  He has had three prior classes taught by Galiana and is now enrolled in her Global Perspectives class. It is one of his all-time favorites. “Global Perspectives was by far the most enjoyable and edifying class I have taken in my High school career,” Snow told me, “I learned to analyze documents, write college level papers and reports, and to critique and recognize credibility.” Nate likes the respect Galiana gives to her students and her insistence that they, in turn, treat each other with respect. “She lets everyone share their opinion. She makes students consider [and compare] other viewpoints, [while mostly withholding her own].”

Caitlin Smith is a junior, having taken both U.S. and World History from Galiana. She is currently enrolled in Galiana’s Government and Economics class and hopes to go to M.I.T. or Georgia Tech to major in Aerospace engineering. “Mrs. G has a passion for world cultures and has a way of intriguing students with her lessons,” Caitlyn noted, “She sparked my interest in history and taught me more effective ways to study. In Cheerleading and Key Club she helped me to grow as a person and has been my 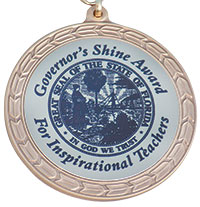 Dylan Demkovich is a junior. He hopes to major in physics at the University of Chicago. He has taken Galiana’s World History course as a freshman and is currently enrolled in her Global Perspectives course. He says that Galiana’s classes have changed the way he looks at world events and has shaped the way he processes and compares information. “She is one of the best teachers I have had,” says Dylan, “She is really invested in the class and makes concerted efforts to make the students care about the work that they do.”

Joey Politi is a junior. He hopes to major in Mechanical Engineering at Florida Polytechnic. Joey proudly told me that he has taken at least one of Galiana’s classes every year. He is now taking Global Perspectives and Government and Economics. He rates Galiana as “one of the most influential and impacting teachers I have ever had. Not only did I learn about history and global events, but she has also taught me some valuable life lessons of which I have incorporated into my life.”

Patrick Michel is a senior who will be attending UCF in the fall. He has taken four of Galiana’s classes. He brings a different perspective. “Mrs. G was always able to teach the information as if it were a movie,” Michel says, “This made it unbelievably easy to learn and remember.” Michel, like me, often found Social Studies to be boring. “Mrs. G, holds [our] attention by asking questions, which keeps us on our toes,” Patrick added, “I find her humorous and kind (and caring about us). (This makes us) just want to pay closer attention and not let her down.”