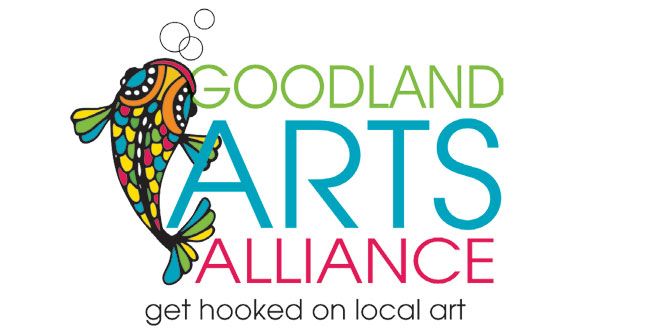 To preserve, promote, and advance the cultural presence in the Village of Goodland through art, history, and education.

This is the mission statement of the Goodland Arts Alliance, a 501(c)3 non-profit formed by residents of the historic village. The members aren’t messing around either. In just over a year’s time, the group formed, became a non-profit within the state of Florida, received its federal 501(c)3 status and held three fantastic art and music festivals.

On Sunday, March 9, the organization held its Second Annual Harbor Arts & Music Festival at MarGood Harbor Park. What has become the unofficial home to the GAA, the park was purchased by the county in 2005 and the majority of it was revamped in 2012. Florida Forever Funds were dedicated to the purchase of the property due to its historic properties.

MarGood Harbor Park’s history dates as far back as the Calusa Indians. Archaeological digs have found ancient pottery, tools and pendants within the park’s boundaries. In fact, many Goodland residents can simply sift around in their yards and find Calusa remnants.

Much, much later, the area was turned into a fishing camp and a community center. The 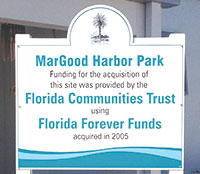 Florida Forever Funds are given to properties of either environmentalor historical value. PHOTO BY NATALIE STROM

main building even housed the first movie theater in Collier County. Small cottages for local fishermen lined the park and were later used as rentals when the property became Mar-Good Resort. The main building doubled as a small grocery store and a museum.

After the 2012 renovation, many residents were disappointed by the way the once fun, funky and old building was turned into a white rectangle. Many of the old fishing cottages were torn down to the dismay of many as well. These were, however, deemed unsalvageable. Now, only four cottages remain. They are fenced off and in terrible condition.

This is where the Goodland Arts Alliance comes into play. The organization’s master plan involves fixing up the dilapidated cottages and using them for myriad artistic and historic outlets. President of the GAA, Tara O’Neill explains, “we would like to use them for gallery space, lectures, art and music education, music events, demonstrations, historical reenactments and a place where artists can openly work while people meander through the cottages.”

To keep them in their original, historic condition, the GAA pled its case to the Collier County Archaeological and Historical Preservation Board in hopes it would 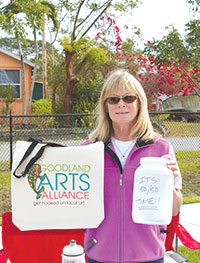 Merchandise sales, raffles and a 50/50 took place at the Harbor Arts & Music Festival to raise money for cottage restoration.

recommend to the Board of Collier County Commissioners that the entire park be designated as an historic venue.

The news came back in favor of the GAA. “The Collier County Historical and Archaeological Preservation Board voted unanimously and also enthusiastically to forward the application for historical designation for Margood Park to the Board of Collier County Commissioners for approval,” explained Craig Woodward, board member of the Historical and Archaeological Preservation Committee. “The County, in applying for the historical designation, realized that it is a win/win for all parties: the cost of restoration of the buildings will now be much less as the designation allows the buildings to be renovated without meeting all current building codes, and the community is enhanced as the buildings, which represent a different time in Goodland’s history, can be showcased as such.”

The final decision goes to the Board of County Commissioners on April 22.

The GAA is ready to, “take possession of them immediately and start preserving them if the historical status is passed,” adds O’Neill. “We need to stop the bleeding as soon as possible. There are broken windows and cracks that need to be sealed to prevent further damage.” 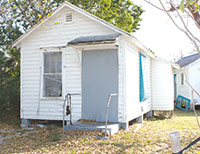 still green non-profit has already had quite a positive feedback from the local community. Many have offered in-kind donations of time to help restore the cottages once they are in the hands of the GAA. During the recent Harbor Arts & Music Festival, docents took people through the property where the cottages lie, explaining the vision. A separate fund for the cottages has already been set aside, and many donated to the cause that very day.

As Woodward mentioned, historical status means the GAA does not have to meet all current codes, but must keep the buildings in the condition which they were originally built. This process will cost much less, giving hope that in the very near future one of the major goals of the GAA may be met. Some of the cottages were built in the 1920’s; some were built in the 50’s.

The Goodland Arts Alliance raises money through its arts and music festivals and merchandise sales, as well as through donations and sponsorships. Inquiries may be made by visiting the group’s Facebook page: Goodland Arts Alliance (you don’t have to be a Facebook member to view the page). You may also contact Tara O’Neill at 239-642-0528 or taraogallery@marcocable.com.