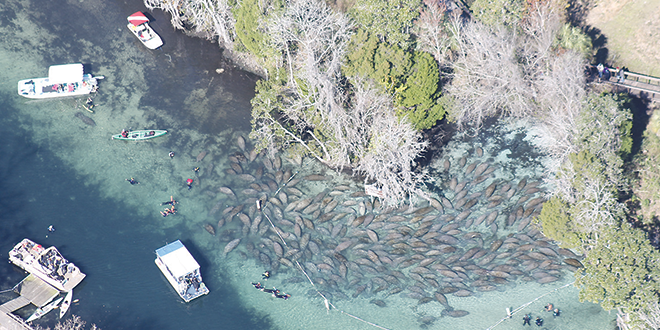 Warm temperatures and clear, sunny days between some of the coldest weather of the year assisted FWC biologists and partners in counting an all-time high number of manatees during this year’s statewide aerial survey. The Florida Fish and Wildlife Conservation Commission (FWC) reported a preliminary count of 6,063 manatees statewide. During the February count, a team of 20 observers from 11 organizations counted 3,333 manatees on Florida’s east coast and 2,730 on the west coast of the state. This year’s synoptic survey count exceeded the previous high count for 2010 by almost 1,000 animals. “Manatees used warm-water sites and other winter habitat areas to cope with a strong cold front that recently moved through the region,” said FWC biologist Holly Edwards. “In many of the regions surveyed, warm, sunny weather caused manatees to rest at the water’s surface, which facilitated our efforts to count them in these areas. Calm waters and high visibility also contributed to the high count.” “We were very fortunate to have near-optimal conditions for our survey this year,” said FWRI

Director Gil McRae. “The high count this year is especially encouraging, given the large-scale mortality events that resulted in over 800 deaths in 2013.” Aerial surveys are conducted annually, weather permitting, to provide researchers with a count of manatees visible in Florida waters at the time of the survey. Because researchers have no way to estimate the number of manatees that were not visible during these surveys, scientists consider these results a minimum count of the statewide population. While this year’s results do not mean that the manatee population grew by nearly 1,000 animals in a single year, they do tell researchers there are at least 6,000 manatees in Florida waters. “Counting this many manatees is wonderful news,” said FWC Chairman Richard Corbett. “The high count this year shows that our long-term conservation efforts are working.” You can show your support for manatees by purchasing a manatee license plate at BuyaPlate.com and a manatee decal at MyFWC. com/ManateeSeaTurtleDecals. Funds from the license plate and decal support manatee research and conservation. To report a dead or distressed manatee, call the FWC Wildlife Alert Hotline at 888-404-FWCC (3922).