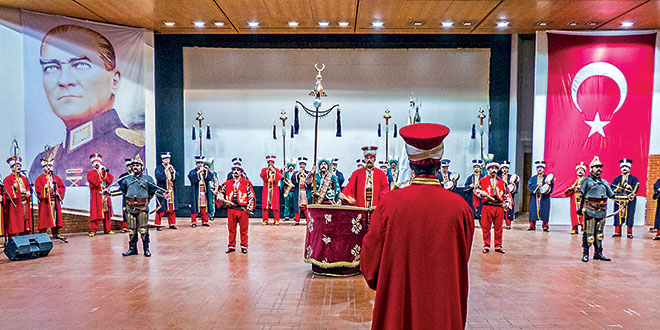 The Mehter band performs below the piercing eyes of Atatürk. PHOTOS BY VICKIE KELBER

After writing about some of the “must sees” in Istanbul (Istanbul Highlights December 26, 2014), I wanted to share other worthy experiences if your travel time allows.

The Bosphorus, the 20-mile long strait connecting the Sea of Marmara with the Black Sea, is fundamental to Istanbul. Important for commercial navigation, it separates “old” Istanbul from “new” Europe from Asia; many of the major sights in this city are located along it and ferries regularly traverse it. Istanbul is a big, sprawling city full of neighborhoods and districts. Taking a sightseeing cruise along the Bosphorus provides a good perspective. Fortunately for us, we took one such cruise the first day of our visit, accompanied by our local contact. It provided us the opportunity to orient ourselves and learn much about the people and customs of the city in a relaxing, picturesque manner. Along the shoreline are palaces, colleges, museums, mosques, fortresses, neighborhood ports and mansions, many of which date from the Ottoman era.

A walk along the pedestrianized Istiklal Caddesi — what I think of as the Fifth Avenue of Istanbul — is a good way to see modern life in Istanbul. There are all manner of shops, the Swedish, Dutch and Russian consulates, cafes, restaurants, galleries, theaters, an upscale multistoried mall, art nouveau architecture, buskers, a Catholic church and lots of people. Ambling along this street in the evening is truly a “Turkish delight.”

Just off of Istiklal is what is known as the Fish Market where one can purchase fresh fish as well as a variety of other foodstuffs. Here also is the cafe and restaurant lined Flower Passage, and a one-lane mini version of the Grand Bazaar with shops selling some of the same products as found at the Bazaar but without the crowds, pushy sales people, high prices and 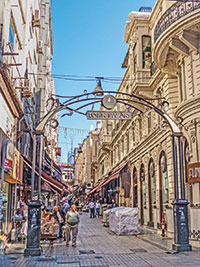 Entrance to the Fish Market off of Istiklal Caddesi

haggling. Istiklal means independence, and the street ends in the north at Taksim Square, the location of the monument to the founding of the Turkish Republic as well as the site of the formation of frequent political demonstrations and protests which sometimes then proceed down Istiklal. It is at Taksim where there is a metro and funicular station as well as the stop for the “nostalgic” or historic red trolley that goes up and down the street.

At the southern end of Istiklal is the world’s second oldest subway station known as the Tünel which whisks passengers down toward the Golden Horn (Bosphorus). Better than taking the Tünel, though, is to wander down to the medieval Galata Tower for its bird’s eye panoramic view of Istanbul. Along the way are many shops selling the ceramics, shawls, jewelry, and other goods so popular as souvenirs. The Galata Tower is accessible by elevator. As the day progresses, the line can be long; a visit first thing in the morning is recommended.

From the tower, it is just a few more blocks further downhill to the Galata Bridge. A two tiered bridge, the top tier is shared by a tram, cars, and fisherman lined up shoulder to shoulder along both sides. The bottom tier on both sides is one fish restaurant after another. Crossing the Galata Bridge will leave one close to the ferries and sightseeing boats, the main hub for buses, and the beginning of the “old town,” just below the Spice Market.

Although I am not usually a big fan of military museums, I was fascinated by Istanbul’s. It presented the entire history of Turkey via dioramas, panoramas, life-size recreations, photos, maps, weapons, uniforms, armor — all with explanations in English. If you are a history buff, especially military history, allow enough time to really 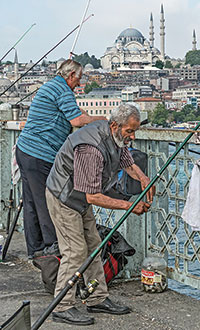 Two of the many fishermen who line the Galata Bridge; Süleyman Mosque is in the background.

explore it and plan to be there at 3 PM for the Mehter Band concert. The oldest military band in the world, the Mehters perform in traditional costumes with musicians, standard bearers, swordsmen and singers, all overlooked by the piercing eyes of a huge picture of Ataturk. I was struck by the fact that all the members were thickly mustached.

A trip to Asian Istanbul was one of my favorite days in Istanbul. The ferry to the district called Kadiköy passes the major sites of the Sultanhamet district, providing for yet another great photo opportunity. Kadiköy is a lovely residential area with pedestrian only streets full of restaurants and cafes. There is a promenade along the water to Mado where there is a pier with recreational facilities. It is a pleasant walk, dotted with playgrounds and adult exercise equipment, lined with huge rocks waterside facing Sultanhamet where one can sit and contemplate all the history contained in that skyline. The market was a local affair, full of wonderful foods and spices and no hustling salesmen. There are modern, upscale stores as well as street vendors and many bookshops.

From Kadiköy, I took a bus (#12 or #12A) to the district of Üsküdar. I didn’t find it as charming as Kadiköy, but it is known more for its mosques. Two of them are right by the ferry docks, one of them built for a daughter of Süleyman the Magnificent, the other for the mother of Sultan Ahmet III. From Üsküdar, it was a quick, though less picturesque ferry trip back to the European side.

Ortaköy is a neighborhood along the Bosphorus five miles north of Sultanhamet on the European side that also provided a pleasant diversion. There are shops, cafes, waterside restaurants and tea terraces, as well as a mosque, synagogue and Orthodox church among 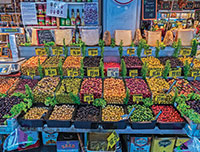 The market in the Asian district of Kadiköy offers a variety of olives.

it’s religious edifices. Since there is an art and craft market there on Sundays, we chose that day to visit. Unfortunately, the ferries that are frequent during the week do not run on Sundays, so we needed to take a tram and bus to get there; we did take one of the Bosphorus sightseeing boats back. Ortaköy on the weekend is popular with locals and tourists alike and traffic can build up; an early visit on those days is recommended.

After the Sultanhamet, or Blue, Mosque, possibly the second most touristed mosque is the Süleyman. Built in the 1500s by the famous architect, Mimar Sinan, for Süleyman the Magnificent, it was an architectural feat for its time. A little off the beaten path, it is worth a visit.

I’m not sure if a discussion about Istanbul would be complete without a mention of the Turkish baths, or hamams. Since I don’t even enjoy spas, I knew one wasn’t for me so, sorry, I didn’t really research or visit any. If you are interested, I’ll leave you to Google for information.

Finally, if you do visit Chora Museum mentioned in my prior column, consider venturing a little further to the Pierre Loti Cafe. Named for the pseudonym of a nineteenth century French writer who frequented this cafe, it can be reached by cable car (or uphill walk) and provides yet another bird’s eye view of Istanbul and a bit of refreshment.