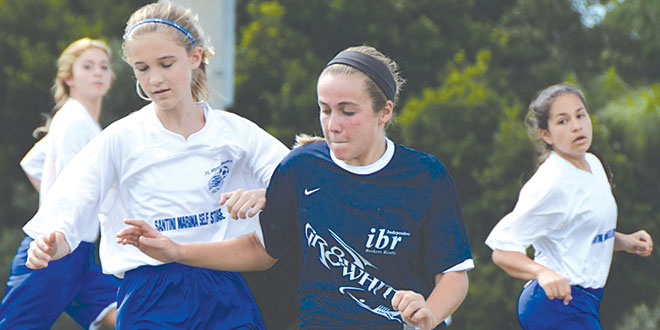 As youth sports evolve, so does youth soccer here on Marco Island.

Last month, the Optimist Club of Marco Island Soccer program showcased the first full-sided traveling soccer team — OCMI-GR8WHITE U14 Girls. The GR8WHITE team was a formidable presence on the field against the Fort Myers Beach Club. Down 0-1 in the first half with a looming thunderstorm over Eagle Lakes Park, GR8WHITE fought hard and came back with a goal scored by Kristen Petronzio to tie.

“These girls are amazing. They are all dedicated soccer players and really appreciate full-sided soccer,” commented Head Coach Pat Baldwin. “We really appreciate the encouragement from the parents to rebuild our soccer program, and we are seeing it pay off on the field with how enthusiastic the girls are playing.”

Under its new Florida Youth Soccer Association (FYSA) affiliation, OCMI is now able to play in FYSA-sanctioned leagues and tournaments throughout Southwest Florida and the entire state. The U14 girls were the first team to take this big step for Marco Island and join the Lee County Youth Soccer League.

“This has been a long road for the Optimist Club and Marco Island. We are the only club on the Island with this prestigious affiliation. We are very fortunate that Patrick Baldwin has been developing this group of young woman over the past several years. We were able to pull together a team and begin play within a few weeks,“ stated Lyndsi Koszo, the new soccer program co-director.

This is the beginning realization of a long vision for the OCMI Soccer Program. With a strong recreational league coming in November, the club wanted to fill a void in the 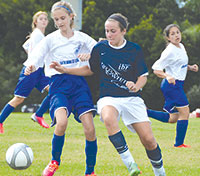 soccer environment on Marco Island. The Optimist Club Travel Program will be announcing additional opportunities for other age levels for U8, U10 and U12 boys and girls as well.

“We want to diversify beyond our strong recreational league and provide a forum for interested athletes to play more soccer outside of our traditional season,” explained Tom Bonos, director of coaching. “However, we are seeing a growing number of kids who have a passion for the game and want to play more soccer. With this travel program, we can do it in a controlled way where we select local and regional tournaments or leagues while trying to make convenient, affordable choices for families as well.”

The Travel Program launch was instrumental due to the support of a strong sponsorship base from the business community who also helped the program rebrand and receive their FYSA affiliation. “We have had tremendous support from our sponsors GR8WHITE, IBR and Palm RV in getting our U14 girls up and running quickly. With an evolving program that is growing and serving so many children, we need help and it’s nice to see the local community rallying behind us.” noted Koszo.

The Optimist Club Soccer Program will continue to offer its Recreational League on the Island beginning in early November and concluding in late February. With more than 300 participants last year, the program expects growth in youth soccer to continue. “Nationally, trends have shown a huge rise in the number of youth playing soccer relative to other sports,” added Adam Campkin, director of recreational programs. “We want to accommodate that growth and offer a strong recreational program where kids can have fun with 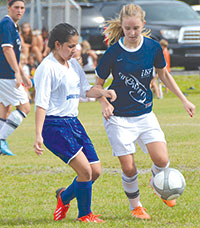 Laura Polestrap steals the ball from her opponent.

their friends and develop their skills at the same time. If they want more soccer, we have the travel program. If they want to play other sports and continue their soccer development, our recreational league is designed for that. For the first time, we are also offering a free preseason filled with clinics and kick-arounds to give kids more opportunities to touch the ball and have fun.”

As the program enters the 2014-15 season, there are many exciting changes to come. According to Baldwin, OCMI is following the European structure by building the right program for every age. “There will be the traditional soccer league from the past played at Winterberry Park,” he said. “However we are adding background checks and concussion testing for our coaches and greater coaching education. Our travel program will resume again in the Spring after our league, and play in different tournaments and leagues. If our coaches think that a particular team is ready to play in a competitive league, than we will join a competitive league. This is new for everyone, and we call it Futball.”

The Optimist Recreational League early registration is ending soon. Practices and games will run Nov. 1 through February with games on Friday nights and Saturday mornings at Winterberry Park. The preseason offers kick-arounds every Tuesday (Age 10-18; 5-7PM) and Thursdays (Age 6-9; 5-7PM). The Future Stars program (Age 3-5) runs every Thursdays (4-5PM) and Saturdays (9-10AM).

The Soccer program is also running free clinics throughout select Saturdays in October. Please see www.optimistsoccer.com for more details, and go the Optimist Club of Marco Island Facebook page for more timely updates each day regarding session times and changes due to the weather.