From Marco To Alaska, Local Female Captain Is Always Busy 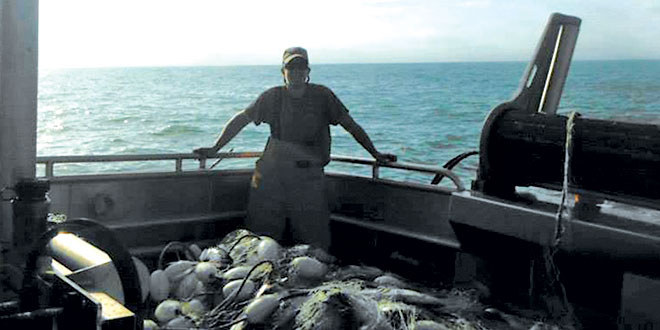 A day of plenty. SUBMITTED PHOTOS

I hear a very pleasant “Good morning, Bob” as someone passes by. “Good morning, Captain Jesse.” I reply as she ushers guests to a catamaran for a sailing tour of Marco Island.

Yes, I did say “she”. One of the few female captains in the area, Captain Jesse Baughman leads a very active life. From fishing with active duty soldiers, to finishing her college education, to working the salmon run in Bristol Bay, Alaska, she is constantly on the move. In addition to conducting catamaran tours for the Marriott she owns a fishing charter business, works the annual mullet run along the Gulf Coast, heads to Alaska each June for the salmon season and volunteers to take active duty fishermen on the water.

She credits the men she knew early on in her life for having a positive influence on her and is still very fortunate because of their input. “Whenever my dad grabbed a gun, a pole or a net I was right there with him, following and learning” she happily exclaimed. 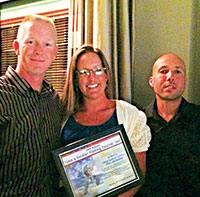 and is close to obtaining her Biology degree, attending FGCU with only a few semesters until graduation. As a licensed captain she understands the aspects of sailboating, sport fishing and commercial fishing and is a proven veteran in all of these fields.

When she applied for a position as a captain for the Marriott she arrived professionally, in a dress and heels. Her interviewer, local author and captain, Tom Williams, asked if she had experience sailing the type of boats in their fleet and she quickly responded “Let’s find out”. She kicked off her heels, took the controls and was comfortable with the vessel within minutes.

Owner of Lady Luck Charters, LLC Captain Jesse specializes in backwater fishing and sightseeing tours, putting that biology major to work for her guests. She knows where and when certain fish are running and, more importantly, she has a great rapport with the public.

She is proud to participate each September in the Naples Take A Soldier Fishing program. With 60 backwater boats and 20 offshore vessels, this is a huge program. As the only female captain in this event Captain 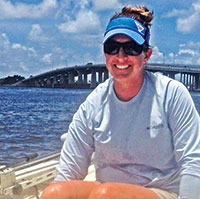 Jesse fishes with active duty service personnel and has been doing so for 4 years. As far as competition here, she and her guests have finished in the top 10 in 2 of the last 3 years!!!

From mid-November until the end of January she packs her bags and heads to St Petersburg, Fl. It is time for the annual mullet run.

These fish will eat heartily along the coastline before heading offshore to spawn. Quite a few fishermen will follow this migration and Captain Jesse is right in the mix. Starting in St. Pete she’s on a 2 person skiff and will work the coastline down to Naples during this period, pulling in 2-3,000 pounds of fish per day! This fall she will have her own boat for this venture, a 2 person, 21-24 foot Carolina Skiff and she can’t wait to get going again.

To me, her most fantastic adventure comes each summer. On the 1st of June she will depart for Bristol Bay, Alaska for the annual salmon run. She will be out to sea for 6 straight weeks on board a 32 ft. 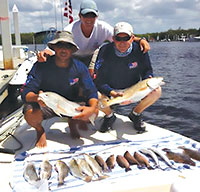 Joel is pictured with an overslot redfish.

gillnetter with a total crew of 3 plus 1 skipper. Encounters out there can be very unpredictable. Rough weather can cause nonstop 8-10 foot seas. However there are some rewards. The opportunity to see both Beluga Whales and Grey Whales are common and, along the shoreline, both Grizzly Bears and Brown Bears can be sighted as well as the majesty of Bald Eagles and Golden Eagles. However, it would be remiss to overlook the greatest reward…a 73,000 pound catch of salmon during this time!

Yes, a local girl does well. She lives a life that many men just dream about. Hard working and adventurous, she does so with a kind heart. She has the ideal mix of professionalism and personality.

For me, I look forward to those days when she passes by and I smile when I hear that pleasant “Good morning, Bob”.

Captain Jesse can be contacted at jleebaughman@comcast.net

Bob is the owner of Stepping Stone Ecotours and is also a naturalist on board The Dolphin Explorer. He is a recent graduate of Leadership Marco and a member of the Florida Society for Ethical Ecotourism. Bob loves his wife very much!