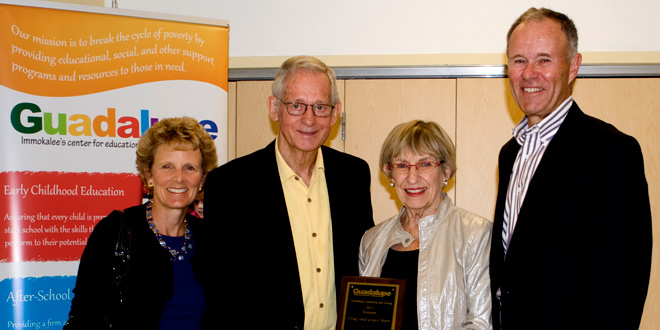 The Guadalupe Center of Immokalee has inducted seven new members into its Wall of Honor, the highest recognition given by the non-profit organization, for playing pivotal roles in the growth of the Guadalupe Center and its programs. Four of the seven are residents of Marco Island.

The new honorees are Doug and Grace Herr; and Bud and Eileen Roche, all of Hideaway Beach Club.

The Herrs have served as Mentors to the high-achieving high school students in the Guadalupe Center Tutor Corps, and have played major roles in the expansion of the Guadalupe After-school Program (GAP).

The GAP program provides kindergarten through second grade children who struggle in school with the help they need to catch up to grade level. It includes both academic and enrichment opportunities, utilizing high-achieving members of the Guadalupe Center’s Tutor Corps to serve as academic role models and to help struggling children see that success is within reach.

Bud and Eileen Roche also have been heavily involved in the GAP program, and played major roles in the expansion of the college scholarship fund, which now totals $1.3 million.

“These wonderful, dedicated people not only wrote generous checks and shared their knowledge and expertise,” said 2013 Board Chairman Donald Popejoy, ”they also rolled up their sleeves and got to work. These are people who have made a 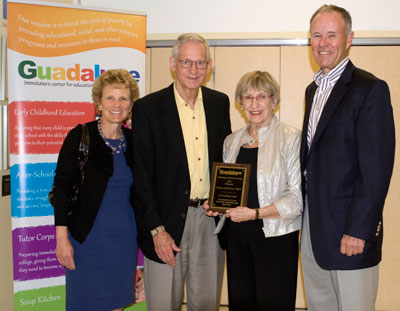 significant difference in their fields and in the quality of life of their communities. Now they’re committed to changing the futures of the children of Immokalee, one student at a time.”

Also honored were Nancy Near and Jacke McCurdy of Bonita Springs, who were driving forces behind the fundraising and building of the Jim Near Early Education Center, and Sister Judy Dohner, one of the Guadalupe Center’s earliest executive directors. Barbara Oppenheim, president of the Guadalupe Center, accepted the seventh award on behalf of Sister Dohner, who now runs St. Damien’s Children’s Hospital in Haiti.

The honorees and their luncheon guests were treated to a performance by the “Clownfish” class of five-year-olds in the Early Education program, followed by tours of the state-of-the-art facilities. With its library, cafeteria, art center, playgrounds, gardens and 18 classrooms, The Early Education Center now serves 264 children from infants to Pre-K.

The Wall of Honor was established in 2011 to honor three Marco couples, Bob and Jan Lisbon, Mitch and Elaine Murch, and Blaine and Jean Evans, who founded, expanded, and for many years raised all the funds for the Gap program. Over the years more than $4 million has been raised by GAP for the children of Immokalee.

For more information about the Guadalupe Center, call (239) 657-7711 or visit www.guadalupecenter.org.