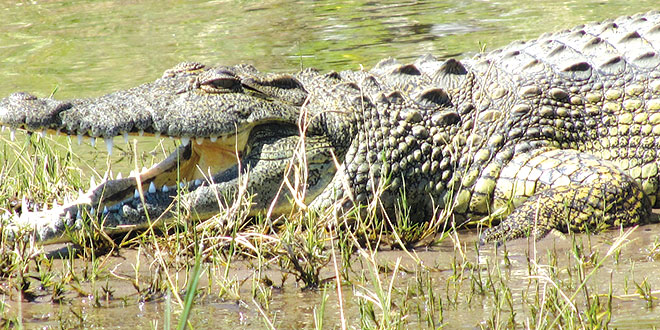 This crocodile is reason enough not to swim in the river — or dangle a hand!Photo at left, ‘Roughing it’ while on safari

Have you ever decided, spur of the moment, to take the trip of your dreams? I did, and it was the absolute best travel decision I ever made. I thought I was fully travel booked for the year 2014 when last June I received via e-mail a virtual tour of a South African trip: I was hooked!

I did the groundwork beforehand, visiting an infectious disease doctor for the necessary shots and medications. All I needed was a typhoid shot, part one of a Hepatitis shot with part two to follow in six months, and malaria pills. I was also advised to take along some Imodium, Pepto Bismal tablets, Tamiflu and an antibiotic — “just in case.” Fortunately, none was needed.

A passport must be valid at least six months before travel, and one is advised to have at least six blank pages in it. That didn’t make much sense until we found ourselves passing through two or three African countries every day, lining up at their customs and immigration for the needed stamps.

In my opinion, there are two ways to go to Africa: “Peace Corps” style and first class. I chose the latter knowing full well I am beyond roughing it. I like flush toilets, comfort, hot and cold running water on demand. Fully aware of the distance from home, I gambled as little as possible on accommodations, connections and food.

Since the flight is extremely long (approximately 24 hours in the air), I bit the bullet and booked business class.

I arrived in Cape Town, South Africa, on a Friday evening, and was promptly met by a driver (with lemon-scented towels, ice water and refreshments), who whisked me off to the Cape Grace Hotel dockside. It was everything one would ever want: gracious, immaculate, spacious, perfectly located with all amenities. A welcoming letter and packet in my room from the tour guide explained the itinerary in detail. I had received a

brief account from the tour company before I left home.

I met with the 27 other tourists the next morning in the lobby, boarded a bus and headed for Table Mountain. I was gritting my teeth, steeling myself to take the revolving cable car up the mountain for months, knowing full well I am petrified of heights. It was cloudy, and no one had thought to mention the extreme difference in weather, so once we arrived safely at the top, traveling through mist too thick to penetrate, we stepped out into what felt like a windy refrigerator. Within a few hours the clouds began to clear, the sun emerged, and the view of the city on the bay was spectacular.

Descending in the cable car, I hardly shook, feeling like a pro.

The bus headed out of town to the Stellenbosch region, home of some of South Africa’s finest vineyards.

We couldn’t help but notice the huge expanses of slums and shantytowns outside the cities, as 40 percent of South Africa’s population lives below the poverty level. Kids, lacking proper playgrounds, played soccer on the highway’s shoulders.

What a contrast! The first stop was lunch at the stunning Delaire Graff Estate. From its driveway lined with exotic flowers, olive trees and animal statuary, botanical garden and architecture, this elegant property is a work of art and boasts some of the area’s finest cuisine. Each course was accompanied by fine house wines with full explanations of their vintage. After lunch, we went on to the Vrede en Lust (est. 1688) winery on the Franschhoek Wine Route for a tasting. The winery is solar-powered and located in a beautiful valley, where it’s a local pastime to spend weekends traveling to wineries to sample the wares and stock personal wine cellars.

Needless to say, after all the wine, the conversation back to our hotel was somewhat limited by snoozing passengers. Those not suffering the 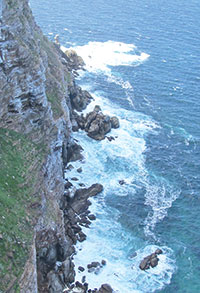 The Cape of Good Hope, where the Atlantic and Indian Oceans meet.

effects of the wine and jet lag had the evening off to explore Cape Town.

Early the next morning, we were back on the bus for a leisurely drive along the coast, stopping to see a colony of African penguins at Boulders Beach and then for a fresh seafood lunch at a local restaurant. We continued to head for Cape of Good Hope National Park, sighting our first baboons, wild boars and impala along the way.

A funicular took those who didn’t feel like climbing to the foot of the Cape of Good Hope lighthouse. From any observation point, the view was simply spectacular, looking down on the steep rock face to the meeting place of the Atlantic and Indian Oceans.

Facing an early departure the next day, it was back to the hotel to pack and prepare to fly out of Cape Town to Johannesburg and then to Kasane, Botswana, where we would board the Zambezi Queen, our “houseboat” on the Chobe River for the next four days. Several passport pages were stamped in quick succession as we went from South Africa to Botswana and Namibia, ending in a one-room cement cell on a small island for the final stamp before finally boarding the boat.

I recall being piped aboard a ship, but never welcomed with cocktails, a cool lemon-scented cloth and a singing crew. This was but a small taste of the warm hospitality and unique service we were to enjoy.

The Zambezi Queen is tendered on the banks of the Caprivi Strip, a short distance from Africa’s Four Corners, where Botswana, Zimbabwe, Namibia and Zambia meet.

I had imagined cruising up and down the river on this lovely boat, looking at one or two animals from a distance that might appear from the jungle. Wrong! Twice a day, tenders that held eight people departed to take us on tours of Chobe National Park

by water. Talk about ‘up close and personal’! While I had been worried that my camera would not be good enough to capture decent photos of the wildlife, my biggest concern became being too close to be able to get the entire animal in the photo. If I used the zoom lens, I could have seen if the animals had fleas.

The guides took the small boats right up to the beach where herds of animals congregated at the water’s edge. The first morning we saw huge crocodiles, lizards, hippo pods, Cape buffalo, herds of impala, baboons, eagles, Egyptian geese and enormous elephants. It was simply overwhelming to be so close to these majestic beasts.

One day we were taken by boat to a land safari by jeep in Chobe National Park, where we added to our inventory by seeing giraffes gliding through the trees, nibbling on leaves. At one point, the jeep parked beside a herd of elephants cooling themselves under a tree beside the road. Suddenly, crashing through the bushes beside us out lumbered an estimated 4,000-pound hippo on his way to the river to cool off. The guides constantly gave us directions about safety, not to stand up in the jeep or wave our arms around. Apparently, the animals see the jeep as no more than a non-threatening object like a tree, but any movement might make it seem aggressive. Trust me, you would not want to challenge Harry the Hippo!

One afternoon, we went to visit a local village. There were many children running around, and they obviously found us curiosities — a little shy at first, they eventually warmed up and attempted to speak with us. They lived in mud huts, raised chickens and cows, and grew some small garden crops as well. The women and children sang and danced for us, and we never did get a clear answer to where the men were. We could understand why

The Zambezi Queen, our modern floating houseboat/hotel on the Caprivi Strip of the Chobe River.

teens wanted to leave these villages for the excitement of the cities, but for a decent quality of life, they might be better advised to live here rather than in urban slum under a piece of cardboard by the side of the road unemployed.

One evening we enjoyed an African Boma, or dinner cooked outside under the stars — and what stars we saw! In a different hemisphere, the Milky Way made the night sky white, and our intrepid guide, knowledgeable about constellations, identified all of them.

It was just the beginning of May; winter was on the way; and fortunately, this meant we didn’t see any mosquitoes! A few people complaining of upset stomachs from malaria pills soon quit taking them, on the advice of the natives who stated this was a low-risk area for malaria anyway. Our cabins were sprayed daily we were assured, with ‘green’ repellants, and even when outside at night I, who claim to be bug bait, returned home with not one nibble.

The crew sang their farewell song as we left the Zambezi Queen, and we were off to Victoria Falls, Zimbabwe by bus. If you think going through customs and immigration in American and European cities is a nuisance, try standing in the blazing sun for over an hour while you are being processed from Botswana to Zimbabwe — very slowly.

Our bus driver regaled us with tales of Zimbabwe’s exciting history, using better grammar than most local US radio and TV announcers. After his monologue, people asked him personal questions and were astounded to learn this well-educated young man had paid eight cows for his bride (because she was not a nurse or a doctor, in which case the price was 15), but he cheerfully added he didn’t have to hand over the bride price until she produced a male heir. If that was not forthcoming, he could return the merchandise! Africa is truly a land of contradictions!