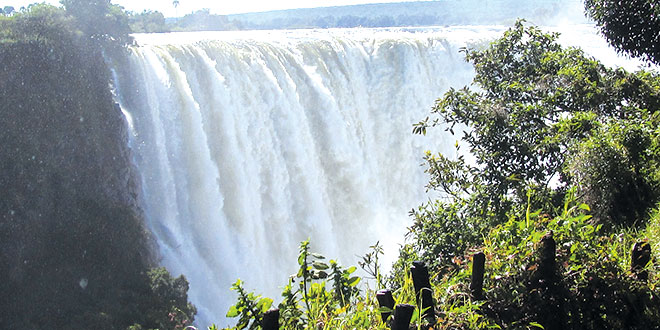 Victoria Falls, one of the Seven Wonders of the World. PHOTOS BY CAROL GLASSMAN

We were greeted at the Victoria Falls Hotel by staff bearing mint-scented wet cloths and cold juice drinks. From the hotel’s garden, one sees mist rising from the Falls in the distance, while everything from baboons to wild boars and even elephants roam the grounds. We were asked to keep doors locked at all times, as baboons are smart enough to open doors and trash rooms looking for food.

The hotel is a wonderful example of old Colonial charm, a remnant of earlier days. It is beautifully maintained with manicured gardens and immaculate rooms. A huge bed, an overhead fan swinging lazily and billowing mosquito netting, make one want to sleep immediately, but no, there was a surprise in store for us.

We were taken to the Victoria Falls Wildlife Trust Elephant Sanctuary where no more than 18 animals are kept at one time with 70 trained handlers in totally natural surroundings. They began with a few orphans, and as they grew up and reproduced, the number grew. They study them scientifically and the chief handler and trainer is a bundle of energy and knowledge. They also keep a rather vicious cheetah that does respond to its handlers. After an entertaining talk, we met the elephants who all have names, and had an opportunity to feed them, either by tossing food pellets into their mouths or allowing them to vacuum food from our hands into their trunks.

We were served an elegant dinner in an outdoor kiosk, plying a lot of “pinch me” to remind ourselves we were in the wilds of Africa! Seeing a huge hooded cobra from the bus reminded us of this fact.

Everywhere in Victoria Falls, the earth vibrates from the waterfall — one of the Seven Wonders of the World. Standing 300 feet high Victoria Falls has the largest sheet of 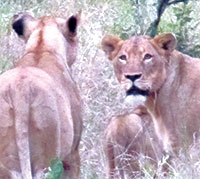 An up close and personal view of a pride of lions.

falling water in the world with more than 144,000 gallons per minute cascading over the rocky cliffs. Prior to explorer David Livingstone’s discovery of the Falls, they were known by the resident Kololo people as “The Smoke that Thunders.”

At the Falls entrance our guide explained the paths, made sure we were provided with slickers, and led us off to trek around the Falls. Figuring I would either get soaked from exposure to the Falls or from wearing a heavy rubber slicker, I chose the former. After a few hours of walking, my mind was reeling with the stunning natural sights, and I was in danger of losing my pants which had become soaked with mist from the Falls. I was almost blinded by the constant stream of water running from my hair to my eyes. I kept my camera in my pocket, hoping to keep it dry while whipping it out for quick photos.

We had the rest of the afternoon free to dry off and wander around the town. Some of the people in the group left for Pretoria by train, and as the station is in the hotel lobby, all they had to do was walk across the street where a red carpet was rolled out whenever a train arrived at or left the station.

Our next treat was a Zambezi Sundowner Cruise, filled with spectacular views of singing hippo pods and a sunset in which the deep oranges and reds challenged any artist’s palette.

An overnight stay in the magnificent hotel and spa in Johannesburg, The Fairlawns, was next. We were greeted outside the hotel by staff all decked out in black sleek suits, starched white shirts and undertaker ties. They handed us minty-fresh damp towels and led us to a table of fresh juices and fruit kebabs. All very soft spoken, they took us to rooms where everything from wine and sherry to nut 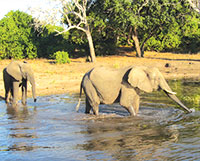 brittle, plums, apples and the whole wet bar was gratis. Every suite in the hotel is decorated in a different style, and I got “The Miami,” done in opulent Art Deco, quite a change from the Colonial safari style at Victoria Falls. My only thought was: “Too bad it’s only for one night.”

We met for cocktails and the announcement of a guest speaker before dinner. We prepared to nap through this but were pleasantly surprised to find ourselves sitting on the edges of our chairs as Robin Binckes, not your conventional author (“Canvas Under the Sky,” “Great Trek Uncut”) or Afrikaans tourist guide spoke of the sometimes chilling history of South Africa up to the present day.

We tore ourselves away from this beautiful place the next morning, and boarded a small plane for Hoedspruit, a tiny airbase of the South African Air Force located adjacent to Greater Kruger National Park. Talk about contrasts! The final leg of our journey was to spend five days at Tintswalo Lodge, with twice-daily guided land safaris in and around the Park.

Our guide who looked after us from Cape Town departed, and we met our new guides from Tintswalo Lodge. Loaded in two SUVs with the usual cold drinks, we drove for an hour. Greeted at the Lodge again by refreshing scented cloths, we walked down an elevated wooden path to a beautiful deck overlooking a pond. In the lobby, we were assigned our huts. I was given “The Stanley,” a bungalow-like stone structure with its own deck and hot tub. With all the baboons around, I knew I wouldn’t use that! When I walked in and saw the interior, I anted to move in permanently — spacious, modern, beautifully finished in African safari style. Only during daylight may we walk alone. The rest of the time we have 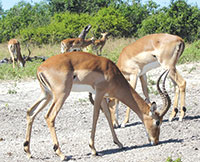 to call for a guide as there are predators everywhere.

We were served high tea on the deck at 4 PM, which was more than enough for a full meal, and then we met our guide and tracker for the week, Fritz and Mojo. We set out on our first safari, and immediately saw springbok, buffalo and a herd of zebras. Fritz is a real Afrikaans cowboy behind the wheel, while Moho sits strapped to a seat above the left fender, tracking and sighting — it gives real meaning to the phrase “riding gunshot.” If an animal should attack, he is in a very vulnerable position. By about 5 PM, it got dark, and a cold front was moving in. I was glad I had grabbed a light sweater, but wished it were a ski jacket by the time we got back at 7:30 PM when it was cold! After changing, we enjoyed a Boma dinner outside with lanterns all around long tables and everyone in high spirits.

I knew the next day would be cooler, but with heavy clouds and rain nearby, it was cold. All of us dressed in as many layers as we could. After tea and coffee at 6 AM, we set out with the guide who obviously had a plan, driving along until he sighted blood and tracks. Shortly thereafter we came upon a pride of two female lions and six to eight cubs. There wasn’t much left of a small female steenbok and her fawn the lions had killed. From there, the next plan was to find a large herd of Cape buffalo. Driving around was a blast, if you didn’t get tossed out of the jeep or whipped in the face by overhanging branches. The jeep held nine plus the driver and was well equipped with binoculars, drinks, rifles. Fritz simply blasted off the road, pushing down small trees and 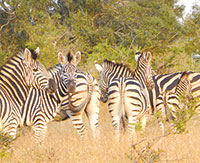 A telephoto lens is not required for picture perfect wildlife photography

bushes, climbing up and down hills into dry wadis and river beds, acting as if he was behind the wheel of a tank or bush hog. He finally found a large herd of about 300-400 buffalo. After observing them for a while, he drove right into the middle where they studied us as we took photos.

He then announced it was time for a break, and right in the middle of the field of buffalo cookies (atmosphere, you know) set up a table (with cloth) and served tea, spiked coffee and muffins. Fritz said he had another big surprise for us. In a riverbed, the staff had set up long tables and were busy cooking and preparing a sumptuous breakfast over open bonfires on the ground. We got back to the lodge around 10:30 AM and were free until high tea at 2 PM. Another safari would follow.

I kept looking for Tarzan as he was the only thing missing there in the depths of Africa, but I had to admit, when just looking at the flora and fauna and the topography, I could have been anywhere in Florida. It wasn’t the equatorial jungle I had expected to see.

My photos now included herds of zebra, several prides of lions, hyenas, a herd of Cape Buffalo and a white rhino. In almost every case, we were right beside them — no telephoto lens required.

As the week wound down, I didn’t look forward to leaving. I was living in a fantasy word of super-first-class accommodation accompanied by people who were paid to show me a good time, but even the realization of that wasn’t enough to dissuade me from wanting more. South Africa is but a smattering of this vast mysterious continent, and it was a teaser. I want so much more.

My travel plans are booked for a while, but who can say what the future may bring, when the rest of Africa beckons.