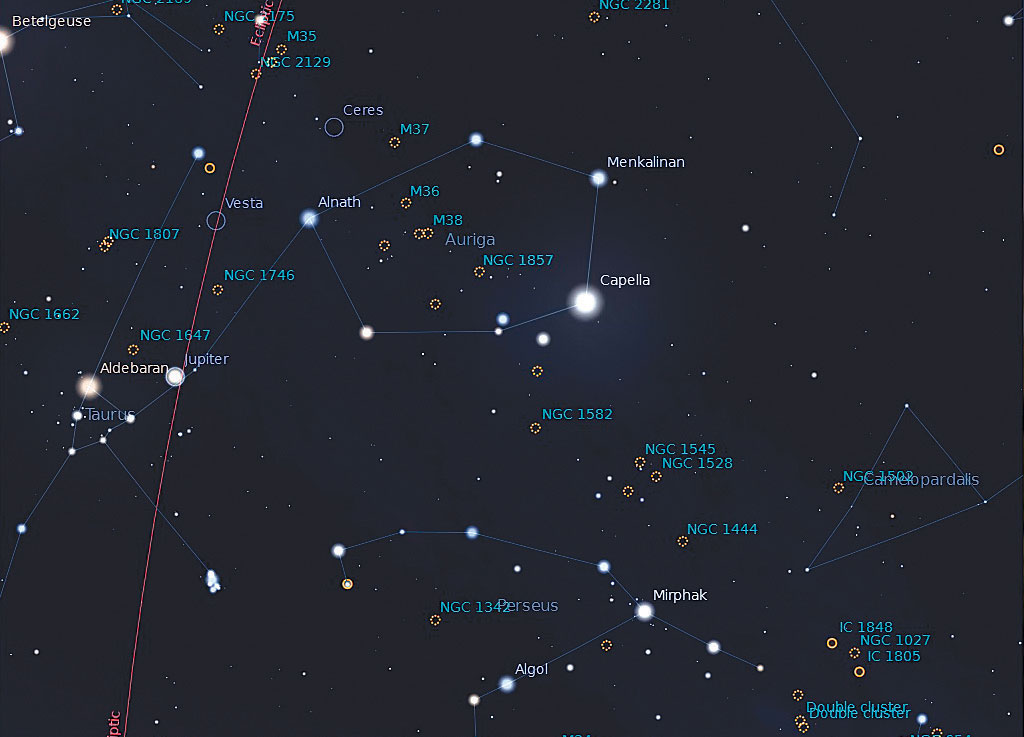 Comet PanSTARRS almost exactly matched expectations earlier this month; binoculars were required to see it. Those of you who avoided the clouds were treated to a glimpse of the second magnitude comet with a tail about one degree long (twice the width of the full Moon). My club’s members beat the clouds by racing up and down the length of the beach in their vehicles trying to find a hole the comet could shine through!

Tonight, we return to one of my favorite areas of the sky – the Taurus, Auriga, and Perseus section of the northern Milky Way. Here we are looking directly towards the outer rim of our Galaxy through the thinnest sector, and consequently, the Milky Way is somewhat dimmer here. Nevertheless there is a lot going on; binocular owners that sweep across the sky will pick up a number of star clusters in their field of view. Naked eye viewers have no trouble picking out two clusters, the famous Pleiades and the somewhat more spread out Hyades near Aldebaran.

The brightest star in the area, and indeed one of the brightest in the whole sky, is Capella the goat star; so called because in old drawings of Auriga a goat is located there. In a bit of whimsy the three stars just to the left of Capella are called “the kids.” The pure white color of Capella provides an interesting contrast to the orange of the nearby Aldebaran. There are at least three star clusters inside of Auriga bright enough to be seen with binoculars and one, M37 just outside of it.

Jupiter remains the brightest object in the sky this evening so don’t put your binoculars away without taking another look at it. A steady hand will reveal all four of its Galilean moons. Io is alone on one side of the planet, while on the other side Ganymede and Europa appear to be almost touching, and Callisto is the furthest out. (Description valid only for indicated time.) If your hand is too unsteady try resting your elbows on a solid object like a car roof.

For a naked eye test, take a look at Algol in the constellation Perseus. Normally it is almost as bright as the nearby star Mirphak, but once every two days, 20 hours and 49 minutes (yes, it is that precise) the star dims to less than half of its original brightness. In fact it becomes about as equally bright as the star just to its left. Algol belongs to that group of stars known as eclipsing variables. What actually happens is that a closely orbiting, but much dimmer, companion star moves in front of Algol and blocks most of Algol’s light.