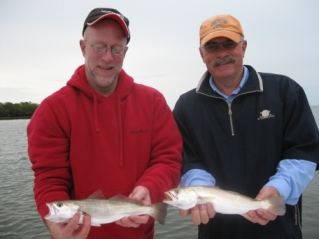 I don’t usually mention the previous month’s weather in a current fishing report.  However, the weather this past January was so severe that it made a definite impact in the fishing world in southwest Florida. The frigid temperatures caused many species to leave the area, at least temporarily.  There was also a huge and noticeable fish kill because of the exceptionally low temperatures. Because of this significant fish kill, the Florida Fish and Wildlife Department elected to close our snook season to give the snook a chance to rebound.  This decision is supported by all of us who want to continue to make a living fishing and also to enable sharing the sea’s bounty with others.

Although snook season is closed, we are still able to catch and release this superb fish. There are, though, many other species of fish to catch in this area of southwest Florida that provide plenty of action and make excellent dinner party feasting.

The spotted sea trout and its smaller cousin, the silver trout are good catches and both of these species have been reported in abundance.  This action should continue throughout the month.  Silvers tend to school tightly and when found, big catches are likely.  Remember to take only what you need to eat and to consider and respect this pristine area that rims the one and only Everglades.

The black drum have moved into the deeper holes in the back country and these big boys offer tackle-busting entertainment.

Although the pompano moved away from their normal feeding grounds because of the lengthy cold temperatures of January, this month will give us some of the best pompano fishing 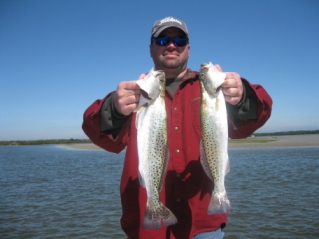 All and all, southwest Florida is bouncing back quickly from the cold weather and fishing guides are experiencing much action and success in the backcountry.

After a day of fishing and feasting on a big meal of fried trout, nothing is better for dessert than a slice of authentic Key Lime Pie.

Recent Catches
This week, while fishing with Don Knott and John Mueller from Isles of Capri, we landed dozens of silver trout ad some spotted sea trout as well.

Silvers tend to school tightly so when found, you can produce big catches but remember to take what you can eat and always practice conservation.

Also this week, Jeff Collins from Buffalo, New York (he didn’t seem to think our weather was too cold) caught some nice spotted trout.

Final Thoughts
Don’t let these chilly early mornings keep you off the water and remember that winter in beautiful southwest Florida is over by mid-morning. Take a kid fishing, don’t boat stingrays, and properly release all fish you aren’t planning on putting in the cooler. See you on the water, Capt. Jay.