Flying Down To Rio 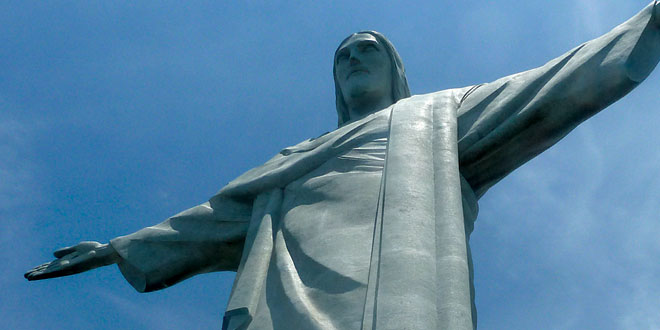 Rio de Janeiro in January and February tends to be steamy… sorry, gentlemen, this refers to the weather, not the girls. More about them later. My splendid daughter invited me to escort her to Rio, since her husband works about 80 hours a week and prefers traveling to Europe anyway. I went out of my way and did her the favor of being her guest.

The Norte Americana tourista should be well prepared for a different world.  January and February (Carnival time) are hotter and more humid than New Orleans, Houston, or Orlando – combined – in mid-summer. But, that’s minor compared to other features of Brazil.

In Rio, they speak Brazilian Portuguese, one of the most difficult languages for anyone to understand – even including folks from Lisbon I believe. There are a lot of “shs” and other odd endings, together with a mish-mash of a few Italian sounding words. Example: “Good Morning” is technically “Bom Dia,” but it seems to be pronounced “Bon Zhia.” “So long” or “see you later” is apparently a combination of Italian and a Chinese dog with a black tongue. It sounds like this:  “Chow-Chow”. Brazilians appear to be fond of the word “Oi,” not to be confused with “Oy,” well-known in Yiddish as a universal expression of woe. “Oi” is on signs everywhere, and is also a standard cell phone answer. It also seems to mean, “OK” or “I’m listening” or whatever else seems appropriate. Not many Brazilians seem to speak any English, and the usual American technique of speaking louder and louder for clearer understanding simply doesn’t work.

Proceed to Plan B to communicate. Everybody uses thumbs up for any response to anything. A driver kindly lets you into line. Give him/her a thumbs up. Another driver cuts you off. Give him/her a thumbs up. Your server brings a glass of water.  Thumbs up. A monkey stares at you in the Botanical Gardens. Thumbs up. A dog poops on the sidewalk. Thumbs up. Your bill arrives after a modest meal, and you gag on the huge price. Thumbs up. There’s no yelling, screaming or extended middle fingers… just a cheery thumbs up. With all the thumb use it’s surprising that Brazilians are still able to text with those thumbs.

Since it was Carnival time, my daughter thoughtfully booked box seats for the climactic last day of the spectacle. Our guide cautioned us that, “Brazilians like their music loud.” She was wrong. It was deafening. After several weeks I’m beginning to recover my hearing. Suggestion: practice lip-reading if you go to the Carnival so that you can understand English when you get home.

Yes, the Carnival is spectacular. Aside from the noise the floats are huge and imaginative. OK, gentlemen, here it comes: the girls thrive on thongs, and they shake and quiver all over. Not only that, but Rio seems to have more beautiful women per square inch than Hollywood in its wildest dreams. If the sound and the heat do not overcome you, your knees will probably get weak from the female procession. The last day of the Carnival, held in an open arena designed by the great Brazilian architect Oscar Niemeyer, resembles the old Roman Circus Maximus, except that it only goes one way. The last night of the Carnival begins at 9 PM and ends at about 6 AM the next morning.

Rio developed a reputation for high crime not many years ago. It’s been cleaned up very much and a bunch of “shantytowns” (nests of poverty and crime) have been taken down. On beaches wide enough for two or three football fields they play beach volleyball and, believe it or not, beach futbol (soccer).

Now the highlight of any trip to Rio: the statue of Christ the Redeemer on one of the many peaks surrounding Rio. Whether Christian, Buddhist, Jewish or any other denomination – or even with no religious background – the close up of the 90 foot figure is overwhelming. It’s worth the time and expense to get to Rio just to get to that incredible statue.

In addition to the statue, there’s an adventure taking two cable cars up the peak known as Sugarloaf. You can experience the animal joy of watching some apparently mentally challenged aerial adventurers take off from the peak in their hang gliders. My daughter turned pale when one nice young guy asked her to fly tandem with him as he staggered to the take-off slope. We retreated hastily.

There’s a lot more, but it’s time to cool down and recover what’s left of my hearing.