Fly Fishing on the Middle Provo 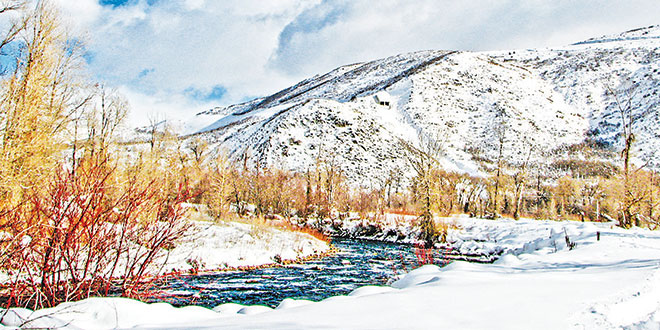 There is fly fishing year round on the Middle Provo, even when the ground is snow covered. photoS BY Vickie Kelber

This column is my husband’s idea. He suggested I write about something in which he is interested. So, at least this week, no museums, no churches, and except for a quick mention, no shopping, no restaurants,…..just a river and some fish.

To learn more about fly fishing and the Provo River, I met with Ben Nelson, Matt Puodziunas, and Peter Robinson of Trout Bum 2 in Park City, Utah. Trout Bum 2 is a comprehensive retail and guide service. In 2013 and 2014 it was named Park City’s best fly fishing shop by readers of the local newspaper, The Park Record. The store is stocked with all sorts of clothing, equipment, flies; anything one could possibly desire for fly fishing. As Ben said, “yes, an entire store dedicated to catch that pea brained fish.”

Most of Trout Bum 2’s clientele are families. Many are tourists in town who want to try fly fishing. Their largest growing demographic is women. They run men and women’s clinics and the women’s clinics always sell out. There are also a number of international customers, predominately from England and South America.

There are obvious advantages to booking a guide service. They provide the gear of which there is much, licensing, and instruction. Most important is their local knowledge. They know the river. What they can show you in a day took them a few years to learn; you will have a day of not just “fishing” but also “catching”.

What makes the Provo so special? The Trout Bum 2 experts readily admit that the Park City area is not Montana or Colorado, but there are

The Middle Provo is surrounded by beautiful scenery.

good opportunities for the fly fisherman. There are three sections of the Provo and they are all very different.

In 1999, a restoration project for the Middle Provo began; it was completed in 2008. As a result, while other areas and states have access issues, the entire Middle Provo is public and there are easements open to everyone. There are seven parking areas complete with restrooms, trash receptacles, and information boards. Two of the sites have accessible fishing platforms for people with disabilities.

The Middle Provo is 15 to 30 feet wide, restricted to flies and lures only. It provides year round good fishing and regular hatches. On any given day, one can use all types of flies….streamers, dry flies, nymphs. It is in a beautiful location with mountains as a backdrop, less than an hour from a major airport (Salt Lake City) and within a small radius one can find almost any amenity desired.

Trout Bum 2 practices only catch and release although there are limits for others who want “keepers”. They are adamant about no kill. Why? Said Ben with a grin, “we are so good at what we do, there would be no fish left if we let the sport fishermen kill them.”

Most of the fish in the Middle Provo are brown trout with an occasional rainbow. There are also Rocky Mountain whitefish, the only native species. A typical catch is 8-12 inches, 20” is a possibility; the record is over 30”. Years ago, the river was stocked; now the fish are self replenishing.

Although the height of the season runs from Fourth of July to Labor Day, fly

The fast moving Middle Provo is home to 3500 wild trout per mile.

fishing is available year round. Despite the winter cold and snow, the water temperature stays a fairly consistent 35-55 year round and there is dry fly fishing in January. The saying is, “If the skiing is bad, the fishing is good.”

For fly fishermen, this will be meaningful: the major hatches on the Middle Provo are the blue-winged olives which are tiny May flies, the winter midges, the PMDs (pale morning duns), and the caddis flies which start around Mother’s Day and end in October. The most important hatch is the Green Drakes, in late June to early July; many locals and visitors plan their vacations around this hatch.

The Middle Provo runs between the Jordanelle Dam/Reservoir and Deer Creek Reservoir. The Jordanelle provides water storage for a wide area and is planned as a long term reservoir for a six year drought. Due to changing conditions, water sometimes gets low and is sometimes high. Low water can be good as it enables the use of dry flies, but the water temperature can get too high and the fish die. In high water, there is nymphing.

Although there is great fishing on the Provo, it is also surrounded by small streams that the locals like to keep secret. Perhaps with the right gratuity, a guide might show a client some of them. Three and a half hours away is the Green River, 30 miles of crystal clear green water that flows through red rock canyons, is loaded with fish and has lots of hatches. Trout Bum2 does provide guide service to the Green. Also nearby is the Weber River, another popular 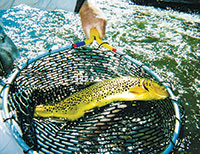 Typical catch on the Provo; an 18” brown trout.

There is an etiquette to fly fishing. If you want to enter the river near someone, you ask permission. Respect people’s space; never crowd anyone. The fish swim up river, so most fishermen fish up river, sneaking in behind their prey. When approaching another fisherman on the river, you should enter below them.

I asked these master fishermen if fly fishing is a sport or an art. They tend to see it as more of a way of life than either. Regarding the art, Ben said wistfully, “no one takes time to learn to cast anymore.”

For years, I have heard my husband, an avid fly fisherman, talk about flies using a lexicon that was foreign to me. Thanks to Ben, I now know what they mean. Streamers mimic small bait fish, nymphs simulate pre emergent or immature insects, and dry flies parrot emerging and mature insects.

Among the amenities of the Park City area are world class and family lodging and dining, all manner of outdoor recreation, spas, an Olympic museum and park, upscale and outlet shopping, galleries, theater, film, concerts.

Trout Bum 2 has a comprehensive website: www.troutbum2.com. It features equipment purchase, guide service information and a multitude of resources for the fly fisherman.