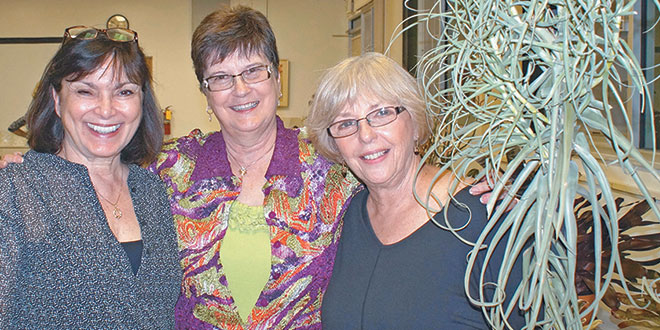 From left: Opi DeFalco, Dale DeFeo and Connie Lowery with the winning TillandsiaDurati.

Island Melodies were the inspiration for the Calusa Garden Club Flower Show at the Marco Island Center for the Arts. The song titles and lyrics depicted summer, sunset, warmth and the illusion of a carefree lifestyle by the water.

A songwriter once wrote, “A song is like an intimate conversation, one you’ll remember from beginning to the end.”

If a song moves you to stand up, dance, clap your hands and sing the lyrics, then it is a “hit.”

If a floral design receives a blue ribbon or the much-coveted Rosette of Excellence, it is then considered a “top of the chart” contender.

Exhibitors worked hard to achieve that perfect balance in their design; making sure the flowers are not wilted or dry; not too tall or too small; not too cluttered; all to evoke an inspirational and emotional response from both judges and visitors.

Susan LaGrotta, a Calusa Garden Club member and long-time resident, made it a family event with mom, Lena Molinari, age 86, nephew Anthony Molinari, and sister-in-law, Christina Molinari. All three generations of the Molinari family declared the flower show a huge success! Beyond the breathtaking floral exhibits, they saw more than 80 horticultural exhibits.

Green Flash at Sunset, Calusa Garden Club member Sue Oldershaw’s entry, received a Blue Ribbon, a Tri-Color Blue, Gold & Red Rosette ribbon for using all fresh plant materials in Section B, and the Award of Design Excellence for the 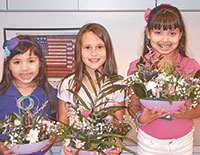 highest scoring exhibit in the entire Design Division. If this were the Westminster Dog Show, this would be the top dog award of “Best in Show.”

Green Flash at Sunset was a “mono-botanic design,” which means it used multiple parts of a plant of one family or genus using stems, blossoms, roots and fruits from one plant family. It was up to the designer to organize all these elements into a winning entry, which Sue Oldershaw managed to do very creatively.

The Junior Gardeners of Tommie Barfield Elementary School’s Junior Gardeners Program also received the Appreciation Award, a rosette of orchid ribbons. There were 18 students from the 4th and 5th grades, who participated in this design display.

Calusa Garden Club member Opi DeFalco was very impressed with the quality of entries this year, both in the Design and Horticulture Divisions. She commented that the theme, Island Melodies, presented some unique challenges for the designers, and that they all “upped their game” for the Flower Show.