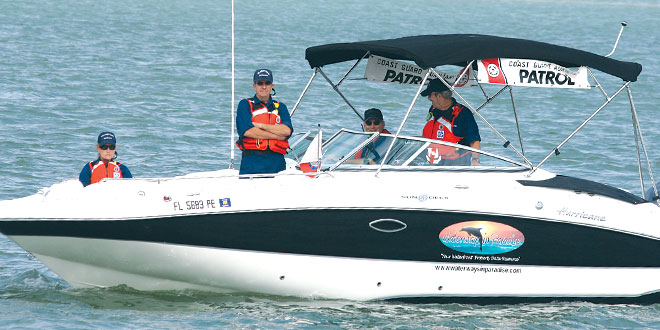 The United States Coast Guard Auxiliary serves many important functions. Flotilla 95, the Marco Island Auxiliary branch, is no exception. In fact, it’s more than that. It is exceptional. After a boater was called in missing on Sunday, January 6th, Flotilla 95 was alerted by the U.S. Coast Guard and asked to aid in the search and rescue mission.

On a Sunday afternoon, two people set out on a boat heading to Goodland. One of them stayed on the island while the other took off on the boat. When the boater never returned, a call was put in and a search and rescue began around sunset by the Collier County Sheriff’s Department and Florida Fish and Wildlife. The boat was quickly found but the boater was nowhere in sight.

Mike Ludwig is a coxswain with USCG Flotilla 95. “I got a call from Fort Myers Beach at about 1:30 in the morning. They told me that the Collier County Sheriff’s Department and the FWC had been out searching and they had to suspend the search until morning. They asked if we could have a boat at the last known position at first light because that’s where they wanted to start the search. I got the coordinates from the Coast Guard out of Fort Myers and we got the instructions.

Crew members patrol the waters around Marco, helping any boaters that may be in need.Photos by Natalie Strom

I contacted Rick Gerschrei who is also a coxswain. We took my flat boat, which is a Coast Guard facility, to the last known position we were given.

“As we were standing by at the position, we were just idling and we heard what we thought were voices. We turned off the motors of the boat and we yelled back and then we knew that we heard a voice. So we idled in the direction that we thought we heard the noise coming from, turned off the engine and yelled again. And this time we definitely confirmed a voice. About the same time we heard him yell, we spotted him because it was still first light; it wasn’t very bright out.”

About 12 hours after the boater had gone missing, Mike and Rick spotted him along the edge of the mangroves. “He was about two to three feet out in the water waving at us.”

As Rick cared for the rescued boater, Mike was instructed to head to the Collier County ramp at Goodland. They were soon met by EMS and Collier County Sheriff’s Department

Mike Ludwig and Rick Gerschrei perform regular patrols as a part of the USCG Auxiliary.

who took over from there.

Before becoming involved with the USCG Auxiliary, neither Mike or Rick had much, if any, boating experience. Through classes offered through Flotilla 95, the two worked their way up to coxswain status and now regularly volunteer their time for search and rescue missions and regular boat patrols. Mike has even had both of his boats USCG certified for patrols. “All the training that we have done paid off. We were in cooperation with a lot of agencies and we just happened to be the ones that found him.

“There’s a lot of man hours and a lot of training that goes into getting coxswains and crew prepared, along with the radio watch and the boater safety instructors. If we weren’t all working as a flotilla – as a team – what Rick and I accomplished, we wouldn’t have been prepared for it,” states Mike. “It’s a team effort.

The USCG Flotilla 95 is always looking for new members. There are many levels of involvement. Whether it be taking a boating safety course, leading one, becoming part of a search and rescue crew, teaching Waterwise programs to youth or simply social outings, there is something for everyone.