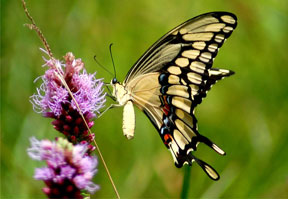 Look up in the sky. It’s a bird. It’s a plane. No –it’s a giant swallowtail, often mistaken for those popular Japanese film star icons, Ro-dan and/or Mothra.

The large shape and the black and yellow coloration make the giant swallowtail hard to miss and easily identified.

The yellow eye spots on its tails distinguish it from the schaus swallowtail, which is abundant in the Florida Keys and has a tail outlined in yellow. They always create an

air of excitement when spotted visiting butterfly gardens or urban areas throughout Florida because of their size and beautiful color.

In early spring there seemed to be so many around so soon that it will probably be a banner year for them. They can be spotted year round in South Florida.

The giant swallowtail visits citrus groves in Florida, where it can find one of its main host plants (plants which female butterflies lay their eggs): orange, lime and grapefruit trees (Rutaceae). Other hosts plants include hop-tree (Ptelea trifoliate); Hercules club (Clava-hercules); and wild lime (Zanthoxylum fagara), a native plant that I have found to be one of the favorites for the giant swallowtail.

The larva of the giant swallowtail is referred to as the “orange dog” by citrus farmers because they can cause minor damage to their citrus trees.

The larva, like all the other swallowtail caterpillars, have little horns that are red in color (osmerterium) that extend from their heads and emit an unpleasant odor like that of old cheese, in hopes of scaring away unwanted visitors. Its wing outline is broken up with yellow lines and spots, which also help to camouflage it from predators.

One of the most unique things about the giant swallowtail is that the first few stages (Instars) of the larva resemble bird droppings. I am not kidding – it looks exactly like a fresh bird dropping – white and brown with a moist appearance, just like the real thing. Most predators just pass them by or don’t see them, making it hard to identify them as anything more than, well, you know what.

In the final stages of the larva, the color, 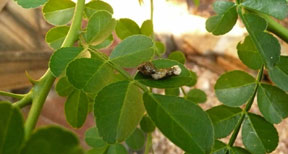 Their flight is a slow, floating dance, sometimes breaking out in a leisurely cruise without stretched wings, somewhat like a glider plane. But when disturbed it can step on the gas.

The giant swallowtail likes to nectar on larger flowers so it can rest on the flower while feeding which uses less energy output. They will nectar on almost any flower. The giant swallowtail can also be found with its proboscis (butterflies tongue) in wet sand or mud drawing minerals from the soil. This is a butterfly habit called puddling.

So keep your eyes open, or should I say duck, when a giant swallowtail goes by.

Mike Malloy, local author and artist known as “The Butterfly Man” has been a Naples resident since 1991, moving from the New York, New Jersey area. At that

The Giant Swallowtail nectars on citrus such as orange trees.

time he started a landscaping and lawn service business and after almost forty years totally in that line of work, he decided to sell his business and concentrate on his passion: “bringing butterflies back to Naples.” He has since written two books entitled “Butterfly Gardening Made Easy for Southwest Florida,” and “Tropical Color – A Guide to Colorful Plants for the Southwest Florida Garden”, and currently writes articles on various gardening topics for several local publications. Mike has planted, designed and maintained numerous butterfly gardens around Naples including many Collier County schools, the City of Naples, Rookery Bay, the Conservancy and Big Cypress National Preserve and is a familiar face at the Third Street Farmer’s Market on Saturday mornings and on Thursdays at the Naples Botanical Garden where he does a Plant Clinic. Mike also does butterfly art and has a website, naplesbutterfly.com