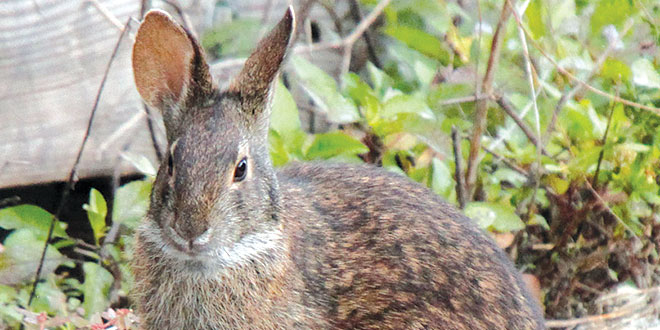 The weather is a bit warmer. Humidity is not too high. Fresh breezes make the Gulf a little choppy, and the island is quieter. It’s spring, and that time of year when many, especially those younger than 10 years old, may be keeping an eye out for the Easter Bunny, who may be hiding eggs around their house or yard — or perhaps hiding 20,000 eggs at Mackle Park on April 19 at the annual city of Marco Island’s Spring Jubilee!

Though the Easter Bunny may visit just once a year, there is a bunny, the Florida Marsh Rabbit (Sylvilagus palustris paludicola), that hops and hides year-round on Marco Island. This native species of rabbit is found in the coastal areas of the Southeastern United States, living near and in marshes, wetlands and fresh and brackish bodies of water. The Florida species ranges throughout peninsular Florida from south of the panhandle to the Upper Keys with an area north of Miami on the East coast where they are not found. The Lower Keys have their own subspecies, the Lower Keys Marsh Rabbit (S. p. hefneri), which is endangered. This endangered bunny was named after none other than Hugh Hefner himself. You figure that out!

Marsh Rabbits here in South Florida are found in undeveloped areas of native habitat and in small nooks and crannies of neighborhoods and parks where water and thick vegetative cover are present. On Marco Island, Marsh Rabbits can be spotted nibbling grasses on the roadsides just as the sun rises or sets along State Road 92 and in the Sheffield/Granada and Estates areas. Heading to Everglades City and beyond, it has always been fun to count the number of rabbits in the Everglades as the sun rises along mowed edges of the Tamiami Trail.

The Florida Marsh Rabbits found in peninsular Florida tend to be darker in coloration than the rabbits in Northern Florida, the panhandle and up into Georgia. Marco Island and the Everglades’ Marsh Rabbits are darker black and redder on their dorsal side, or back, with cinnamon to rufous colors on their nape, feet and legs. Their ear tufts are black with ochre in the inside. The reddish colors do get duller and the black sometimes gray in spring and summer months. Of course, in South Florida, there is an exception (isn’t there always something unusual happening down here) to coloration. There are Marsh Rabbits that are “melanistic” — the rabbit is completely black, and their color doesn’t change seasonally.

Much smaller than the eastern Cottontail and not to be confused with the much larger Swamp Rabbit (found from Alabama through Texas), the Marsh Rabbit is identified with smaller legs and ears, and the underneath of their much smaller tail is never white but a dullish gray-brown. Adults reach only about 2.5 lbs. They are strictly herbivores, eating grasses, bulbs and aquatic vegetation. They do drop hard and soft pellets. Strangely, they will quickly eat the soft pellets (cecal pellets) and re-digest. This diet behavior, called coprophagy, allows them to gain more nutrients from the hard to digest vegetation.

The Marsh Rabbit does hop, but is the only rabbit that walks like a cat on all fours, moving each leg separately and placing each foot down alternately. This gait helps them through tall grass and the dense vegetation like cattails that they live and hide in. Their short hind legs also have less fur than other species of rabbit and very long toe nails. Another specific characteristic for this rabbit is their toes have a larger spread and are easily identified when tracking. These less-furry legs, long-nailed and wide-spread toes aid in swimming.

The Florida Marsh Rabbit is an impressive swimmer and much better adapted in water than the larger Swamp Rabbit. To escape a predator, the Marsh Rabbit will leap into the water and swim, hiding completely under the surface — body submerged, ears laid flat, with just its eye and nose on the surface. If spotted, it will swim away quickly to hide in the muddy water again or find floating vegetation to burrow down. In South Florida, dense freshwater and brackish marshes, cypress swamp, mangrove forests and flooded agricultural fields are favorite places to dwell. They do need high ground nearby for protection and food sources though, so the mowed roadsides are easy places to spot them. They build small nests in cattails and rushes made of grasses and leaves lined with fur, and have been known to take other small animals burrows in logs or stumps.

Many predators seek them out — owls, hawks, coyotes, bobcats, panthers, alligators and snakes, yes, including the invasive python. The males, or bucks, are busy bunnies in South Florida. Breeding is year round with adult females, or a doe, carrying up to six litters of two to four young, or kits (short for kittens), which equates to producing up to 24 kits a year. This production rate ensures a balance of enough food for natural predators and a sustainable population of rabbits, but scientists have found that deadly and invasive pythons are wiping out populations of small mammals in the Everglades, particularly Marsh Rabbits, foxes, and raccoons. This one invasive species can and is completely unbalancing a vast natural system.

Spring is a time of rebirth, renewal and hope. Driving at sunrise or sunset, look for these little reddish bunnies along the roadway. Seeing a Florida Marsh Rabbit represents spring, as it is one that has survived and a sign of hope for a sustainable and balanced ecosystem in South Florida. Let the Florida Marsh Rabbits hop us into spring!