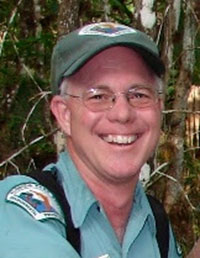 Fakahatchee Strand Preserve State Park biologist Michael Scott Owen has been named Forest Conservationist of the Year by the Florida Wildlife Federation at its 77th annual Conservation Awards Banquet held in Naples.  Owen was recognized for his 20 years of work at Fakahatchee documenting the diversity of plants and animals and measuring water levels—data that is critical to Everglades restoration projects.

The FWF stated: ”For his deep love of nature and tireless efforts on behalf of this very special place, the Federation is delighted to name Mike Owen as Forest Conservationist of the year.”

Owen’s enthusiastic efforts to educate the public about the Fakahatchee through talks and guided swamp walks sponsored by the Friends of Fakahatchee have made his smiling face familiar to scores of residents and visitors.  Most recently, he has partnered with several botanical gardens in an effort to halt the loss of endangered bromeliads. With financial assistance from the Friends of Fakahatchee, he and other biologists have traveled to Cuba to locate several rare orchids species for reintroduction into the park.

The Florida Wildlife Federation is a non-profit organization founded in 1936 to promote the conservation and ethical use of Florida’s Natural Resources.