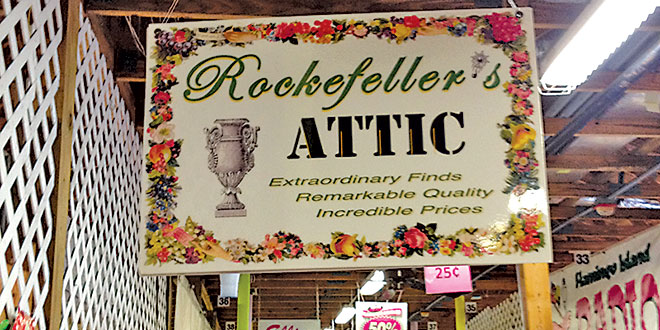 Rockerfeller’s Attic was recon and research for Betsy Bennett.

“FleaBitten — Good Buys Gone Bad,” the one-act musical comedy playing at The Rose History Auditorium next weekend, is not just a figment of someone’s imagination.

As research, co-author Betsy Bennett, took a double-wide stall at Flamingo Island in Bonita Springs and called it Rockefeller’s Attic. It offered stuff that had accumulated in her and her partner’s garages, in their parents’ storage facilities, “and, well, anything we could find that could be dusted off,” she recalls.

But, selling the goods wasn’t the real reason for Rockefeller’s Attic; it was the flea market vendors who surrounded it, and the script fodder they could provide.

“We couldn’t put them all in the show,” Bennett says. One vendor had bought 250,000 greeting cards that were not matched with their 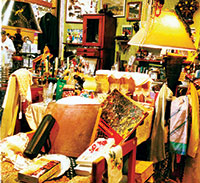 envelopes. Another was a 40-something Slav who told vivid tales of how he had escaped the Nazis.

“The really funny ones all made it in,” she promises, “like the guy who makes announcements over the market’s PA.” He laments — on air — about how his mom married his prom date.

“Flea Bitten” is a celebration of the clerks, carnies and counterfeiters who are all heart with no tax.

Bennett is partner to Rick Compton. Together, they are the Compton and Bennett who brought “Assisted Living: The Musical” to the island the last two years. Those performances were sold-out and enjoyed standing ovations.

“FleaBitten” has played to delighted audiences from Southwest Florida to Ocala, and is booked into 2016 in theatres around the country as far away as Sedona, Arizona.