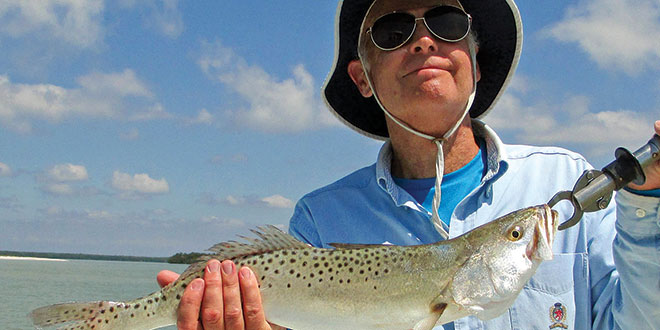 The average air temperatures in April are a few degrees higher than in March and will typically range between 61 and 86 degrees. This will, in turn, keep our average water temperatures up into the mid to high 70s.

Snook are on the move from the back country to the near Gulf river mouths. Best bets for catching snook during this time is live bait like pilchards and thread herring. Try the mangrove shorelines where the water is moving over deeper cuts. Typically, there is an eddy of still water around each point. The snook will be laying in there waiting for bait to be swept by with the current. Drift your bait into the eddy for your best chance.

Look for areas out on the flats where you have grass on one side of the boat and sand on the other. Here you can fish the same flats on the top end of the incoming tide for spotted sea trout and pompano. Try casting out a 3/8 oz bucktail-type jig tipped with very small fresh shrimp pieces for scent.

Ted with a nice Trout on a Captain Rapps Charter. PHOTOS BY CAPT PETE RAPPS

If you want to hook up with the “Silver King”, tarpon are beginning to show on the shallow flats. They are on the move and are feeding on many things like thread herring, pilchards, ladyfish, and crabs. Rig a good rod with a 8/0 circle hook, tied to 4’ of 60lb fluorocarbon leader on a bait runner reel filled with 30lb braid. Stick it in your stern rod holder with your bait of choice and wait for a Silver King to start peeling line off. Click the bait runner into gear and point the tip of the rod at the tarpon during the first run. The circle hook will work its way into position for a solid hookup. After that first run, get that rod tip up and let the circle hook do it’s job to drive the 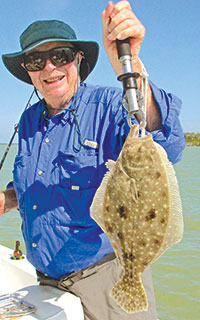 Bob with a Flounder.

hook home… Don’t forget to point your rod tip at him each and every time he jumps so that he can take drag easier.

If heading offshore is your thing, check out some of the “close in” wrecks and areas with good bottom structure for some permit and cobia. The permit will happily accept a live crab on a 4/0 circle hook tied to 30lb fluorocarbon leader on a spinning reel with 20lb test line. Watch for those schools on the surface and cast ahead of the pack and hold on! Cobia will be cruising the same areas, and it’s awesome to see them hovering under a large ray. Try casting out a live mullet on the same set up as the permit and have a blast. If you do not have any live bait, use a plastic eel. They love em!

This month through June, I will be in Big Pine Key to get in on the annual Tarpon Run at the Bahia Honda Bridge. I still have a few openings left for charters there so drop me a line and let’s get you hooked up!