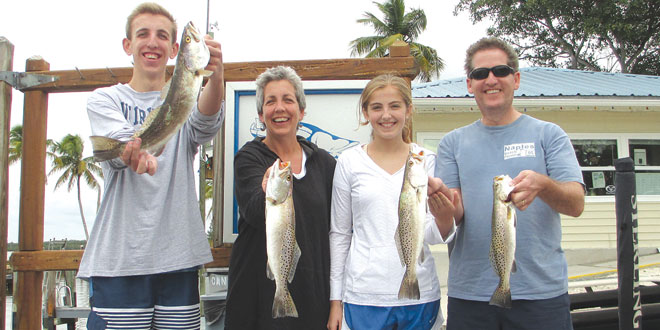 The Apfelbach family with a few nice fish. PHOTOS BY CAPT. PETE RAPPS

Keep an eye on your tide chart because we have some extremely low tides around both the new moon and full moon. Be mindful of the morning full moon low tides Feb. 10-16, and the new moon low tides Feb. 25-March 3. Wind direction affects the tides dramatically. A north or east wind will make the tide lower and longer than expected as it blows the water out and delays its return. I have even come to the conclusion that a low tide on a very cold morning will be lower than the charts predict. 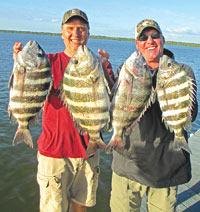 Tim and Brian with some nice Sheepshead.

tide. We drift areas that are 3-5 feet deep and vary from grass to sand. This way, we can expect a combination of both trout on the grass and pompano on the sand. I like to use a 3/8-ounce bucktail-type jig with a good amount of glitter in it. Try tipping the jig with a very small piece of shrimp too. Use your light casting gear with 10-pound test line and 2 feet of 20-pound fluorocarbon leader. In addition to the trout and pompano, you can expect to pick up spanish mackerel, jacks and ladyfish.

The backwater bays and rivers hold species like spotted sea trout, snook, mangrove snapper, redfish, ladyfish and other fun-to-catch species. When fishing for snook, it is hard to beat live baits like pilchards and thread herring. I throw a lot of artificials like DOA’s Airheads and their CAL baits. Stop in your local tackle shop, and ask them about these baits. Snapper will gladly accept pieces of shrimp, and the ladyfish 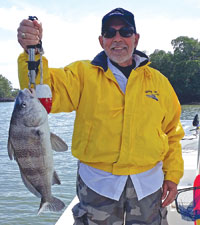 Mike with a Black Drum.

On the outgoing tide, I like to head into the river mouths and the backwaters and fish for sheepshead and snapper. They both love shrimp, and will gladly accept a piece rather than a whole live shrimp. The reason why I like shrimp pieces in February is two-fold. First off, the winter shrimp tend to be huge. By cutting them in half, you can stretch your supply to last a lot longer. Secondly, the sheepshead and snapper have small mouths, and will usually just rob a whole shrimp right off your hook.