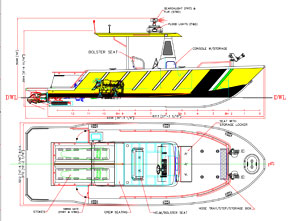 Since 2006, Fire Captain Tom Bogan has been steadily pursuing the acquisition of a fire-rescue boat for the Marco department. With a price tag just under 400 thousand dollars, it’s been a long, slow asking process, but 2012 has arguably been the year to sadly justify his persistence.

“We used to commandeer regular boats [to respond to an emergency].” Bogan explains the ‘evolution’ of the departments’ offshore emergency services. Today they respond to accidents and fires on the water with a Pathfinder, a recreational boat whose emergency performance in recent disasters proved to be an epic fail.

In May a boat exploded near the Dela Park condominium on the south end of the island. The explosion threw the occupants out of the boat and the resulting fire damaged the building. “We had to pull out of that fire,” explains Bogan. “The pump malfunctioned and would not pump water.”

In the past six months Bogan says that the fire department has responded to three incidents where gasoline was incorrectly pumped into the bilge instead of the engine, which can cause a boat explosion similar to the Dela Park fire. “Recreational boats are made of fiberglass and have gasoline tanks, making them extremely flammable” and for the fire department to use its recreational boat to fight a fire on another is potentially creating a bigger disaster instead of a rescue. “We had to pull out of the last fire. It’s just extremely dangerous.”

With approximately 6,000 boats in the water on Marco Island and about 30,000 boats registered in Collier County, Bogan expects incidents like these to continue to increase. The Marco Island Fire Foundation concurred. “The Fire Foundation voted unanimously to urge council to move ahead with this project. What is a life worth?” Monte Lazarus represented the Foundation at the October 15 council meeting. Council agreed, voting to allow the city to execute a contract on the vessel.

At the meeting, Bogan reiterated the extensive research that went into his choice. He contacted six manufacturers and contacted fire departments nationwide to get feedback. He and Chief Murphy went to San Diego, where the harbor patrol has several versions of the boat on 24/7 duty.

The 30- foot vessel the fire department is seeking to acquire is manufactured by Metal Craft Marine, which is providing GSA pricing (the discount the federal government negotiates with a contractor.)

The proposed boat’s key features include:

• The aluminum body and diesel engine make it capable of pulling up to a burning boat with less risk.

• A pump capable of generating 1500 gallons of water per minute and a foam system to fight fiberglass and hydrocarbon fires.

• A FLIR (forward-looking infrared) system that can sense body heat in the water for up to a mile, allowing for night time search and rescue.

• Jet drives that allow the boat to enter extremely shallow water and remain steady during patient transport. An advanced life-support system allows for life saving measures to be taken while the boat is moving. Currently, “there’s no way to treat a patient and transport them at the same time. That can be critical when you are trying to save someone’s life,” points out Bogan.