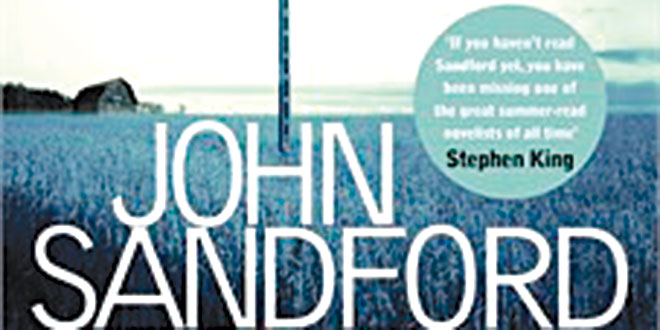 “There’s nothing to match curling up with a good book when there’s a repair job to be done around the house.” – Joe Ryan

The 24th book in John Sandford’s Prey series proves the author is only getting better at his craft. I was engrossed in this story from page one. Although Field of Prey is a mystery, the reader knows from the beginning who the killers are. The mystery involves how the police track them down.

The story opens with the kidnapping of the “fifth woman,” Heather Jorgenson, while she is depositing refuse bags into the dumpster behind the diner where she works. Suddenly a canvas mail bag is pulled over her head, her legs are duct taped together and she is shoved into the back of a truck. She struggles for a minute or so, able to move only her arms inside the bag, then realizes she has a multi-tool with a 3-inch serrated knife in her uniform pocket. She slices herself out of the bag, cuts the duct tape, then attacks the driver with several vertical stabs to his neck and back, causing the truck to run off the road. She gets out of the ditched vehicle and runs across a rural Minnesota field to a distant lighted house. By the time the police arrive, the truck is still in the ditch, lights are still on, but the driver is gone. They check the registration and race to his house but he is not there and never shows up during months of subsequent surveillance.

Zip through a decade plus a few years and we are with a teenaged boy and girl who decide to make July 5 a very memorable night. Layton Burns, Jr. knew the perfect spot to make these special memories was an unused neglected field he had discovered the prior summer when detasseling corn. (For you folks from non-corn-growing areas, i.e. city slickers, Sandford includes a succinct description of detasseling.) After Layton and Ginger Childs make a few memories, they try to track down the source of an horrendous odor. Although they can centralize the strength of the odor and hence its seeming source, they can see only grass. They hightail it out of there but the next day Layton talks to a police officer he knows and tells him about the unusual smell. “There’s something dead up there. Something big. I never smelled anything like it.” They go to check it out and discover an old cistern which emits tremendous putrid gas and at the bottom reveals two human skeletal feet. 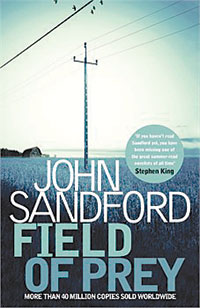 enters Lucas Davenport of the Minnesota Bureau of Criminal Apprehension. By the time Lucas shows up for work the next morning, they have discovered at least 15 skulls and are still counting. Because the cistern is directly over a spring, it is making retrieval of the remains extremely difficult. Eventually, it comes to a total of 21 female victims over about 20 years. The police come to realize the killers are local and they are smart.

For those new to Lucas Davenport novels, it is good to know he is not the typical state government employee. He is self-made wealthy, drives a Porsche 911 and Mercedes SUV, goes on bi-annual trips to New York City to replenish his wardrobe, wears British-made shoes, loves and is loyal to his family, and is still friends with a girl, now a nun and psychologist, he has known since Kindergarten. His relationship with his adopted daughter Letty is remarkably close with Letty even accompanying on some investigations and reading the murder books with him. He is tough, tenacious and thorough. During the course of this investigation, he meets his female counterpart in the form a Goodhue County Sheriff’s deputy, Catrin Mattsson. I am quite certain she will show up in the 25th Prey novel.

In Field of Prey, Sandford develops the plot at intervals to keep readers engaged; my interest never sagged. Halfway through the book the reader realizes the “killers” are truly, deeply mentally ill but it’s another 150 pages at least before their capture. The author uses humor, details of investigative practices and forensics and lots of great dialogue to move the story lines along. Unfortunately, some of the good guys do expire in this book. There are some scenes involving hand to hand fighting between one of the killers and a female hostage that are pretty brutal but well written.

I read this book in two sittings. If you are a patient reader, you likely could spread it over a week or so of bedtime reading. I enjoyed the intelligent dialogue, humor, variety of characters, detailed descriptions of locations and procedures and the fact that Davenport took time to go play for awhile and clear his head. For its genre, Field of Prey is quite good.