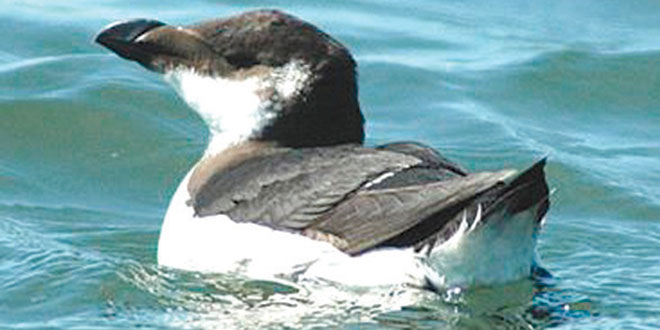 Something is going on. Razorbills, an alcid bird or a web-footed, diving seabird, have been seen all over Florida by avid birders and beach goers. A few have been reported on Marco Island’s Tigertail Beach as well as in Caxambas Pass. Being a peninsula with one of the longest coastlines in the country, Florida has seabirds, so why is it so unusual to see the Razorbills? Historically, there have only been 14 documented sightings of this species in Florida. But since early December, there have been over 20 reports from Jacksonville to Marco Island of single and flocks of the Razorbills! This is a bird rarely seen south of North Carolina! So what is going on?

Experts surmise this “invasion” is food driven. There may be a shortage of food within the Razorbills’ core range that may have driven them further south to Florida. Their core range is typically over the Continental Shelf from the Atlantic Provinces of Canada south to the mid-Atlantic United States to Cape Hatteras, North Carolina. A food shortage and weather conditions would drive the foraging seabirds to places south where conditions could be better. 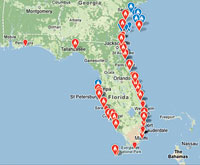 forage and eat small crustaceans (krill) and small fish in the smelt family. They dive deep, gulping the krill and smelt. If the food is not there and oceanic conditions disturbed, feeding is impossible. There are reports, particularly last fall, that an unusually large Sea Surface Temperature (SST) anomaly off the northeast coast, along the Continental Shelf, was approaching temperatures of 4 degrees Celsius above normal. This anomaly presumably had significant changes in types and distribution of fish and other food for the foraging seabirds. It could be an event that changes long range dispersals as NOAA’s Northeast Fisheries Center states that sea surface temperatures for the first half of 2012 were the highest ever on record for the Northeast United States. Concurrently, the surface waters off Florida have been cooler than normal, so Atlantic Ocean surface water temperatures have been warm creating lack of food sources and the waters off Florida have been relatively more productive. In addition, there is a possibility that the disruption of Hurricane Sandy may have been the tipping point to drive the wayward Razorbills to Florida to seek food. 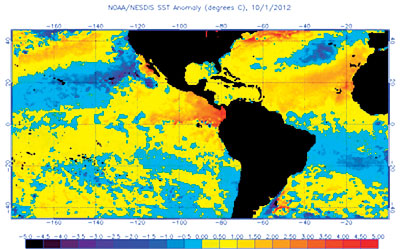 of Southwest Florida Wildlife Rehab Center has had about twenty birds brought in for care since early December from Marco Island north to Estero beaches; unfortunately all not surviving. The biologists report the birds are emaciated and exhausted. This is due to the long flight down and not enough food to sustain the long range dispersal from their normal range. The type of fish also may not be the same as the smelt they eat in their core range. Smelt tend to be oilier and may not be as nutritious to the Razorbills compared to the Gulf and southern Atlantic fare.

It is exciting to see the Razorbills in such unusual conditions and locals, but it is concerning that they are so far out of their home range. Avid birders may enjoy getting a bird on their “list” but reporting is important for population monitoring. So, if you see a Razorbill or other out of range alcids, report your sighting at www.ebird.org.

If a dead bird is found, please report legacy.myfwc.com/bird/default.asp. For more information on Razorbills or other shorebirds, please contact Nancy Richie, 239-389-5003 or nrichie@cityofmarcoisland.com.