Familiar Fare that Comes at a Cost 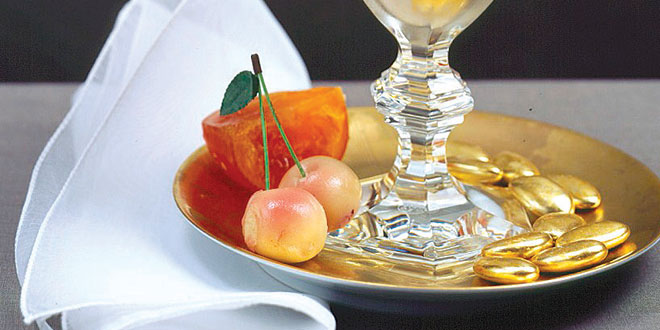 s a lover of food stories, and one who is always looking for new and creative ideas, I happened upon a collection of typical American foods at not-so-typical pricing. So, if you’re looking to spend a little bit more for a bit of the same, take a look at some of these out-of-the-way places with tremendous prices.

This popular Philadelphian street food has made its way all across America. This version, although is only served at the steakhouse, Barclay Prime in Philadelphia. It comes on a ciabatta roll with wagyu ribeye steak, foie gras, truffles and fontina, and includes a half bottle of champagne. Perhaps they only serve on average two per night, those that try it love it!

Available only during white truffle season (October through December), this popular dish gets a major upgrade at the high-end Los Angeles restaurant Mélisse. It’s made with fresh tagliatelle pasta that’s covered with melted parmesan, grated white truffle, and brown butter truffle froth. The $95 price tag, however, doesn’t include the health care costs you’ll likely incur from digesting it.

Treating a date to an ice cream sundae could get a little pricey if it’s at Serendipity 3 in New York City. Its “Golden Opulence” dessert comes with three scoops of Tahitian vanilla ice cream made with Madagascar vanilla beans and chunks of Venezuelan Chuao chocolate. It’s then drizzled with melted chocolate from Amedei Porcelana, and topped with candied fruits, gold-covered almonds, chocolate truffles, marzipan cherries, and… Grande Passion caviar. The garnish, however— a 23-carat edible gold leaf—is really what puts the dessert over the top. And it’s all served in a Baccarat crystal goblet (yours to take home) with an 18-carat gold spoon (which, unfortunately, 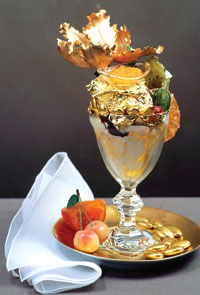 will cost you extra).

The average price of a New York hot dog from a cart is $2, but for an extra $1,499, you could opt for the world’s most expensive hot dog in Little Rock, Arkansas. Unveiled in May at a farmer’s market, this limited-offer dog contained a 1/4 pound of premium beef and was topped with lobster tail, saffron aioli and gold flakes. Now thats a Hot Dog!

The country’s most expensive pizza can be found at Nino’s Bellissima Pizza in Manhattan. A mere 12 inches in diameter, it’s topped with crème fraiche, Maine lobster tail, $820 worth of caviar (six different kinds, including Beluga and a Black Russian Royal Sevruga), chives and wasabi paste. Just a small one-eighth slice will set you back $125. Owner Nino Selimaj, says he’s received hundreds of orders since the pie’s debut in 2007, and that it’s “worth every penny.” Anyone want to go out for pizza?

The bun – a campagna roll – is dusted with gold specs, spread with white truffle butter, and topped with blini, crème fraiche and caviar from Quzhou, China. Inside the bun, you’ll find Japanese Wagyu beef that’s infused with 10-herb white truffle butter and topped with black truffles, fried quail egg, and James Montgomery cheddar cheese from England that’s been cave-aged for 18 months. Oh, and it’s all held together by a solid-gold, diamond-encrusted toothpick – to pick those gold specs out of your teeth.

Summer is on its way with vacation just around the corner. Let me know your take on any of these delights you happen to go eat. They are not in my budget, but they make for quite the story!