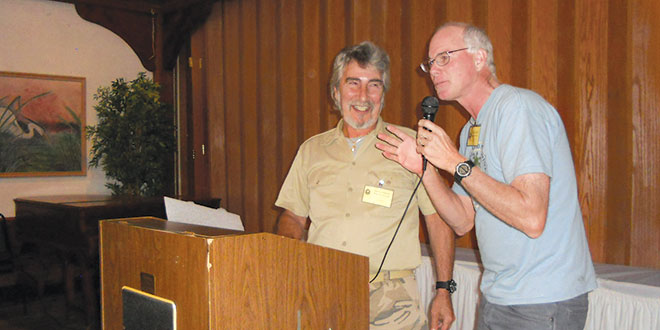 Bill Mesce (left) is paid tribute by Fakahatchee biologist Mike Owen (right) who said jokingly that the greatest tip photographer Mesce ever gave him was ‘hold the camera still.’ PHOTO BY MARYA REPKO

Bill Mesce was given the prestigious Mel Finn Award at the Friends of Fakahatchee Dinner on April 13 for “for reflecting the spirit of the Founding Father of the Fakahatchee Strand Preserve State Park.”

Mel Finn, a Miami attorney who identified 43 different orchids in the Fakahatchee, campaigned to make the territory a preserve. That finally happened in 1974. The award in his name is given by the Friends annually if an appropriate winner is identified.

Mesce certainly deserved it this year. He is a founding member of the Friends, has led swamp walks since they were initiated, and volunteered numerous hours to help the Fakahatchee Strand Preserve State Park over many years.

To learn more about the Friends of Fakahatchee, see www.orchidswamp.org.