FaceTiming Firefighter of the Year 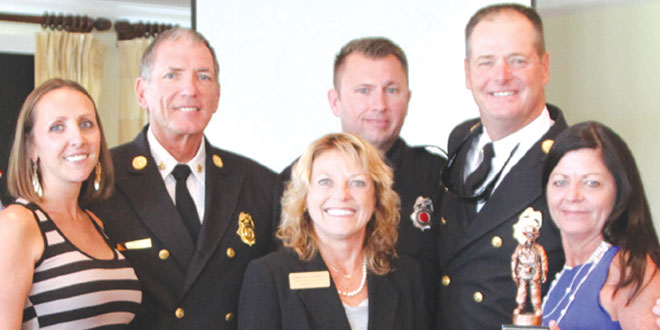 In a sign of hi-tech times, Dan Stoller accepted the honor of being 2013’s Firefighter of the Year via FaceTime (a video cellphone call).

During the annual general meeting of the Marco Island Fire-Rescue Foundation, MIFRD Chief Michael Murphy cited the award going to a ‘home-grown’ Marco Islander. This firefighter initiated an intensive educational track; he has paramedic licensure, is a certified hazmat technician and was promoted to driver/engineer. He recently passed a promotional exam, and based on performance, is now the active fire officer when another is not on duty. He is a role model to others in the department.

In 2011, Stoller served as ambassador to 400 visiting fire chiefs and now serves as ambassador to the Florida Fire Chiefs Association. Chief Murphy added, “Every detail worked like clockwork. Anywhere you go, this fireman is involved, and no matter where you go, everyone asks, ‘is Dan on duty?’” Even with all of these achievements, there is another compelling reason Stoller was chosen.

Chief Murphy invited Jade Purcell, a childhood friend of Stoller’s up to the podium. Purcell held back tears as she described Stoller’s heroic efforts in saving her

three-year-old daughter: “Ironically, it was after the Adamski Run we held for an injured firefighter in Collier County. A group of us went to dinner here locally with my two children when my three-year-old got a hold of a mint and started choking. All I can say is I am so happy we were surrounded by such great people. As a mother, I froze. My husband started the hook thing, trying to clear whatever lodged. Dan immediately stood up, tried doing the Heimlich, but she is a tiny three-year-old, and it wouldn’t work on her. Dan yelled, ‘Call 911’ right away and told my husband to flip her over, and he literally had to pound this piece of candy out of her. I was completely shaken and so happy he was there, along with his brother and another firefighter. It was Dan’s quick thinking, and he just immediately went into emergency mode. I have been friends with Dan since we were little which made it even more important. I am thankful he was there.” 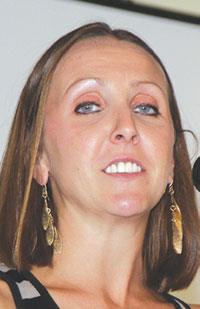 JJade Purcell tells the audience about the day Firefighter of the Year DanStoller saved her daughter’s life.

was able to reach Stoller via FaceTime, where Stoller was able to graciously accept the honor and hear a congratulations from his parents. Purcell told him, “As you know, you saved Savannah’s life over the summer. It is with great honor I present to you and your parents this Firefighter of the Year Award.” Dan’s mother said his dedication would not be possible without his firefighter family.

Also during the meeting, Jeff Kutzke was recognized for 25 years of service to MIFRD. According to Chief Byrne, a young man used to come by the station, and his eyes were like saucers when he looked at the fire trucks. Kutzke continues to look at them the same way today. Upon accepting the award, hesaid, “It has been a wonderful 25 years, so far.”

Chief Byrne then presented the Unit Citation. The award recognizes individuals which through their service as a crew were instrumental in the saving of a life. The award went to the crew dispatched on September 8 to a vessel sinking off the Marco Island coast. Six people were in the water after their boat overturned. Responding to this very difficult call was

The guest of honor at the luncheon was Chief Dave Downey, head of the Miami-Dade Fire-Rescue Department. Chief Downey discussed the domestic and international Urban Search and Rescue Response (USARR) program, of which he is a team leader. The primary goal of USARR is to locate victims — particularly those in collapsed structures — and extricate them. Chief Downey gave excellent examples of the effectiveness of the program, both at home and abroad, resulting in the saving of hundreds of lives.

Marco Island City Council Chairman Ken Honecker swore in the Foundation officers: Dianna Dohm, president; Roy Birkeland, vice president; and Cheryl Ferrara, secretary. During the luncheon, Dohm recognized Foundation board members and thanked all of the guests, Foundation members and corporate members. Ferrara offered a recap of the many Foundation activities in 2013.