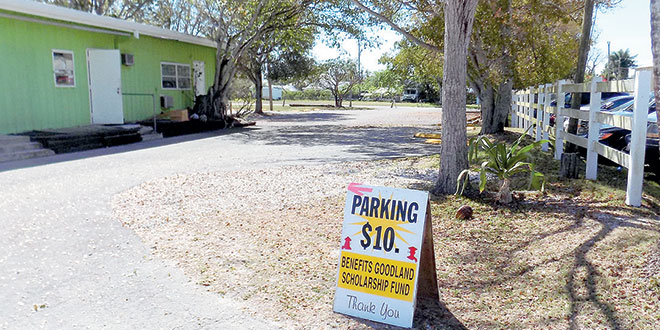 A sign to one of the lots on Goodland that donates its parking fees for student scholarships. PHOTO BY BARRY GWINN

Yes, I’m the guy in the title. I’m also the guy who specialized in complicated fraud cases in the Bureau, and actually taught a class at our training facility at Quantico, Virginia on how to do it. That was then; this is now.

Amy Bozicnik runs the Goodland Scholarship Fund, which awards $500 scholarships to qualified Goodland kids who wish to continue their education after high school. She raises money for this, both from donations and from $10 car parking fees on Sundays. Every Sunday during season, overflow crowds descend on Goodland to revel at Stan’s and eat at our waterfront restaurants. There is not enough nearby parking for them. Ray Bozicnik, Amy’s husband, has donated the Little Bar parking lot, and neighbors across Pear Tree Avenue have donated other sizeable vacant lots. I assist Amy in seeing that everyone has a place to park, and hopefully contribute to the scholarship fund. The Mullet Festival, held on January 31 this year, brings tremendous crowds to Goodland. Marco Island Academy (MIA) was good enough to send down two student volunteers to give us a hand on this date. MIA requires all students to perform at least 100 hours of community service. So it was on that Sunday, Amy was parking in one lot, I was in another, and the two MIA student volunteers, Carson Essi and Cassie Sullivan, were in the third lot.

We opened for business at noon. By 1:30 PM all three lots had pretty much filled up, and there was a steady stream of cars driving by, looking for parking spaces. In this procession, an older model blue Toyota pulled over to where I was standing. The driver, a young man in a light blue t-shirt, was obviously agitated about something. He gave me a plaintive look and said he was trying to report for work at the Olde Marco Lodge, but that both of the Lodge’s parking lots were full. I knew that this was probably true. “I can’t afford $10. If I am late 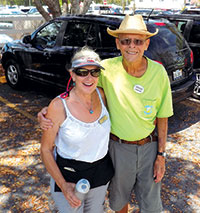 for work, I may lose my job,” he said, “Couldn’t you just let me park here?” My lot was full and things were hectic. There were no free parking spaces within three or four blocks. He had hit a soft spot with me, however. I had paid for most of my graduate school by working in restaurants, and have ever since been disposed to favor and respect that class of workers. I sent him down the road to Carson and Cassie. “Tell them if they have room, to let you in without charge,” I told him. He drove down and disappeared into their crowded lot. I congratulated myself about being such a nice guy. I looked for him to emerge from the lot and hasten to the Lodge, a straight two-block shot down Papaya Street, past the Post Office.

The guy did come out of the lot, but he wasn’t hastening, nor was he heading for the Olde Marco Lodge. In fact, he was heading away from it. He was, in fact, blithely strolling back up the street toward me, getting further from the Lodge with every leisurely step. “I’m going to nail this guy,” I thought to myself. Being an experienced investigator, I was determined to get to the bottom of this – or else. “What are you doing?” I asked, “You’re not going toward the Lodge.” As the guy walked past me (He didn’t stop to talk), he replied, “Well I’m a little early and thought I would go visit some friends.” He then headed through our first parking lot in the direction of Stan’s. I was left with my jaw hanging down and with no snappy retort in mind. I was flabbergasted, flummoxed, and speechless. I briefly (very briefly) considered having his car towed from the lot. But then I recognized that a pretty good job had been done on me. Give the guy credit.

If that guy shows up down here again, I will give him a good piece of my mind. I am still pondering a snappy retort.