Everglades Wildlife: Closer than you Think! 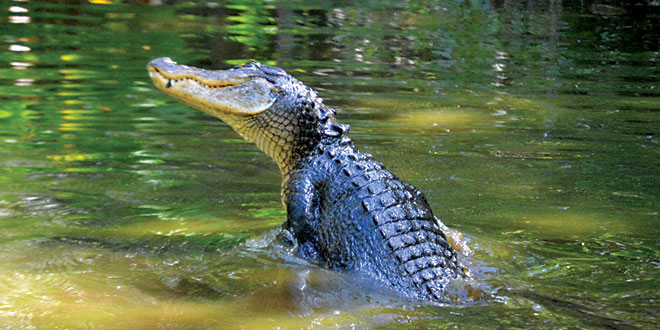 Alligator basking in the sun. PHOTOS BY BOB MCCONVILLE

Bob will be appearing at the Rose History Auditorium on Jan. 21 to talk more in detail about the birds, reptiles and mammals of this habitat. The program includes a slide show of many photos he has taken and possibly a live animal or two! Start time is 7 PM. Everyone is welcome. MIHS members are free. All others are $5 and proceeds benefit the Marco Island Historical Society.

J.M. Barrie wrote in one of his books about a place far, far away called Neverland. It was a land that prevented people from growing up, remaining a child forever. All you had to do was follow “the second star on the right, and straight on ‘til morning.”

I feel the same way when I venture into the Big Cypress Swamp and the Everglades. I get that “I won’t grow up” attitude, and my Neverland is only a short way from Marco Island. There are no Never Birds or crocodiles that have swallowed alarm clocks here, but there are some very interesting creatures.

The first animal people think about when mentioning the Everglades is the alligator. They are a throwback to prehistoric times and have not changed very much since then. They can be found throughout Florida, but the Everglades is a perfect habitat for them. Sometimes you will see them in the fresh waters of the swamps and rivers or just along side of these areas. Gators regulate their body temperature by using external sources of heat, like the sun. When they are too warm, they will make their way into the water to cool down. This means they are “exothermic.”

Not a whole lot of people are aware of this but we can find the alligator’s relative just off of Marco Island. That’s right, we have crocodiles in our midst!

They have rebounded from a population estimate of 300 in the 1970s to about 1,500 today, extending from Sanibel Island around to Biscayne Bay and into the Florida Keys. There are two known nesting areas not too far from us. Crocs can be differentiated from gators by the triangular shaped snout and the fourth tooth on either side of the lower jaw is visible. While gators prefer fresh water, the American Crocodile likes saltwater or brackish water. They are usually shy of humans but should be respected at all times.

The Florida panther can also be found in the Big Cypress Swamp and Everglades areas, just around the corner from us.They now patrol only 5 percent of their original habitat, which has been lost to human expansion. As of this writing, 24 panthers have died on Florida roads in Collier and Hendry counties this year. Their food supply, primarily white-tailed deer, also has diminished because of changes in the habitat. In order to survive, these cats are now hunting livestock and even small domestic animals.

Smaller than their cousins — the cougar and mountain lion — panthers in this area don’t need the large, muscular frame required in other places around North America. Here, the adult female will only weigh 75-90 pounds, while adult males will be slightly larger, in the 125 pound range.

Collier County also hosts a sizable population of black bears. Typically, a single bear would require an estimated 400,000 acres of land and a variety of habitats to survive. As with other species, the loss of habitat has forced these animals to change their diet. More bears are now being seen around dumpsters than in their normal habitat.

Among the largest birds found in South Florida are the wood storks. They have a body length that can reach 45 inches and a wingspan up to 6 feet. They have a face that only a mother can love, but are extremely graceful in flight. They nest during Florida’s dry season, when fish — their prime food source — are concentrated in small ponds or pools of water. You can see them moving in shallow water with their beaks slightly below the surface. When they detect food, they can close their beak in 25 miliseconds (1/40th of a second). This feeding technique is called “tactolocation,” and wood storks utilize it very well.

Other birds such as the Crested Night Heron, Great Blue Heron, Snowy Egret, White Egret and Green Heron can be see on a regular basis. Barred Owls are here as well, and I located the nest of a Great Horned Owl recently.

Eagles are nesting right now, and chicks should be seen in the nests within the next few weeks. The Bald Eagle is so majestic and has rebounded in numbers consistently in the last 30 years. There are several nests in the Big Cypress area and also an active nest here on Marco Island.

Anywhere around the continent that you might find water, there’s a good chance that Ospreys will be there as well. Although some of these raptors around the continent will migrate, Ospreys in our area stay here year round. They mate for life and return to the same nest each year. They, too, are reconstructing their nests and preparing for their young to be born.

There are a wide variety of snakes in South Florida, but only four are poisonous. Eastern Diamondbacks, Pygmy rattlers, Cottonmouths (Water Moccasins) and Coral Snakes are the dangerous ones here. Of 46 species of snakes in Florida, 34 can be found in the southern portion of our state.

We can’t leave without mentioning one more non-native animal that is in our area, the Burmese Python. Last year, at least two were found on Marco Island, and a 14-footer was captured on the Isle of Capri very recently. They are here to stay, and the fear of some herpetologists is that they are eating their way through the Everglades, heading from east to west, bringing more and more to our region. In some areas of Everglades National Park, the number of birds and other wildlife has decreased in population by more than 80 percent due in part to these pythons.

Everything from raptors to panthers to crocs and slimy, slithering creatures are only minutes away from Marco Island. There is an opportunity to see so may creatures that you might not find elsewhere. I look forward to my next journey to my Neverland. It will be very soon, and I promise you “I won’t grow up!”

Bob is the owner of Stepping Stone Ecotours and a naturalist on board the Dolphin Explorer. He is a member of Florida See (the Society for Ethical Ecotourism). Bob loves his wife even more this year than last!