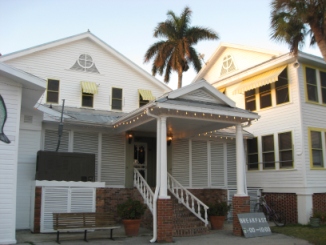 Entering by way of the back door might not be the best way to enter a home of distinction.  However, walking up the back steps and opening the old single-hung door of the Everglades City Rod and Gun Club is an experience of which I never tire.

In so many cases history becomes obliterated by progress,  something that is forgotten once that back door of the Rod and Gun Club closes.

Take a moment to feel the strength of the polished old wood paneling blanketing the walls and high ceiling; feel the power of the wild Everglades animals mounted on the walls, the huge fireplace, beautiful and safe. The past comes vividly alive.

As the back door vibrates shut there is no way to go but towards a narrow entry hall, its walls covered with decades-old newspaper clippings noting the history of this old Everglades town. They read like a novel one can’t put down. 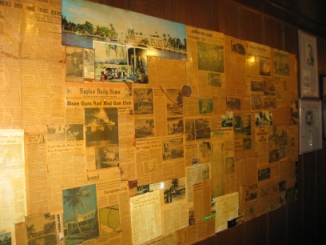 The wall of newspaper articles, papered with history. Photo by Jeane Brennan.

bought all that he could in the Everglades City area, planning to transfer this primitive outpost into another booming Miami.  He purchased the Rod and Gun Club, land on which the first permanent settler had first built his home in 1864.

Collier used the lodge as his private residence, entertaining presidents, musicians, and actors.  Wealthy hunters and eccentric anglers from around the world have visited this historic property since the early 1900’s.

The Rod and Gun Club sits on the bank of the Barron River, facing west.  A long protected porch hugs the lodge along the river side.  There is inside and outside dining, but sometimes just savoring the moment is satisfying enough at the Rod and Gun Club.  Outside on the front along the river, where boats can tie up along the seawall, is a porch with wicker furniture welcoming the Everglades traveler.  Fishing boats, the birds, the mangroves beyond, feeling the quiet and sensing the raw 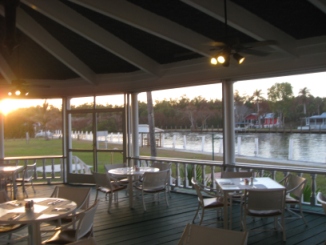 The long porch along the river, where time stands still. Photo by Jeane Brennan.

and beautiful land is an opportunity that many tourists and visitors should have the privilege to experience.

Rooms in the building are not used now, but air conditioned cottages are available and rates are exceptional.  Sitting on the porch after a day of fishing or exploring, while the chef cooks an Everglades fare, is a gift unlike any other.

The Rod and Gun Club is located at 200 Riverside Drive in Everglades City.  From Marco Island, take the Goodland Bridge heading north on CR 92 to US 41 (Tamiami Trail).  Go east and drive about 35 minutes. Watch for CR29 and at the blinking light with the gas station on the corner, head south.  Go straight on the road until the Seafood Depot, where the only way you can go is that sharp right-hand turn.  Continue half way around the round-about toward the Barron River. The Rod and Gun Club is on the right. Call 239-695-2101 for information or go to www.evergladesrodandgun.com.